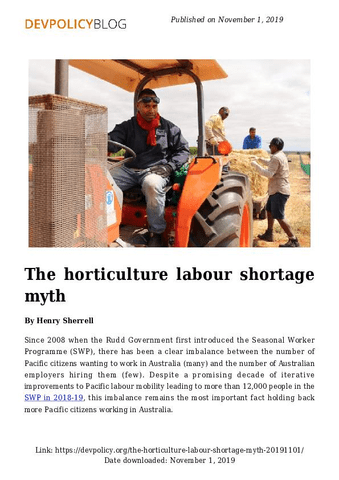 Since 2008 when the Rudd Government first introduced the Seasonal Worker Programme (SWP), there has been a clear imbalance between the number of Pacific citizens wanting to work in Australia (many) and the number of Australian employers hiring them (few). Despite a promising decade of iterative improvements to Pacific labour mobility leading to more than 12,000 people in the SWP in 2018-19, this imbalance remains the most important fact holding back more Pacific citizens working in Australia.

A new report from the Australian Bureau of Agricultural and Resource Economics and Sciences (ABARES) establishes why employers do not hire more Pacific seasonal workers. Demand for farm workers by Niki Dufty, Peter Martin and Shiji Zhao, finds only four per cent of horticultural farms use the SWP.

The authors conducted a nationwide vegetable survey (excluding the Northern Territory) and a fruit and nut farm survey in the Southern Murray Darling Basin. They sampled over 2,500 farms, across industries making up about three quarters of total agricultural employment in Australia.

The results show that only 18 per cent of vegetable farms and 14 per cent of fruit and nut farms who recently recruited had difficulty filling vacant positions. This compares to 44 per cent for businesses across Australia. This is the best evidence to date that there is no horticultural labour shortage in Australia. (Richard Curtain and Stephen Howes compare the contrasting results obtained by another survey here, and explain why the ABARES results are more credible). The surveys conducted by ABARES did not find a large number of unfilled vacancies. Farmers reported recruiting for over 20,000 positions, of which only around 700 remained unfilled.

The human face of labour mobility in Kiribati

Labour mobility in the Pacific: a systematic literature review of development impacts

Foreign seasonal workers in New Zealand horticulture: an ethnographic account of the nexus of labour and immigration policies and employment practices

Labour migration as complementary pathways for refugees in the Asia-Pacific