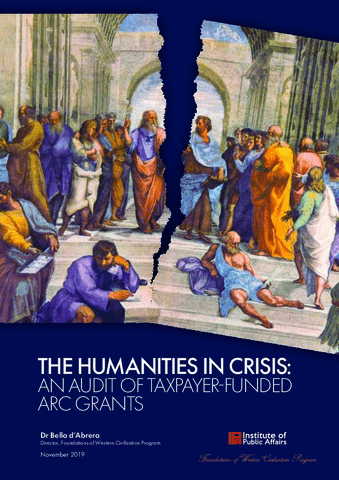 The humanities in crisis: an audit of taxpayer-funded ARC grants

In theory, the university should be the principal institution through which knowledge is preserved, generated and disseminated. In practice however, Australian universities appear to have rejected this mandate. Instead of exposing students to a vast array of ideas, they have become institutions in which debate is being shut down and freedom of speech muted by academics who have adopted a singular world view. At a time when the universities are insisting on advocating diversity as a fundamental academic value, true diversity of opinion is under threat. To paraphrase the American philosopher Allan Bloom, we are seeing the closing of the Australian mind. Moreover, the universities themselves have become markets without competition as graduating students are leaving with a calamitous combination of enormous debt and worthless degrees. Australian universities are in crisis.

This report is an examination of the taxpayer-funded Australian Research Council (ARC) humanities grants which have been awarded to Australian universities since 2002. The results provide further evidence that universities are well and truly wedded to identity politics to the detriment of the teaching of Western Civilisation.

This piece of research is the fourth in a series of papers which systematically review what is being taught and researched in the humanities in Australian universities.

According to the ARC, the purpose of the organisation is ‘to grow knowledge and innovation for the benefit of the Australian community’ and that ‘the outcomes of ARC-funded research deliver cultural, economic, social and environmental benefits to all Australians.’ This audit reveals that there is an enormous disconnect between the stated aims of the ARC and the predominance of identity politics in the humanities research proposals which have received government funding since 2002.

Can the humanities survive in the modern university?

Beware the ‘Research Excellence Framework’ ranking in the humanities

Intangible assets: funding research in the arts and humanities

DASSH response to the Parliamentary Inquiry into Nationhood, National Identity and Democracy (2019)

Leiden Statement: the role of the social sciences and humanities in the global research landscape