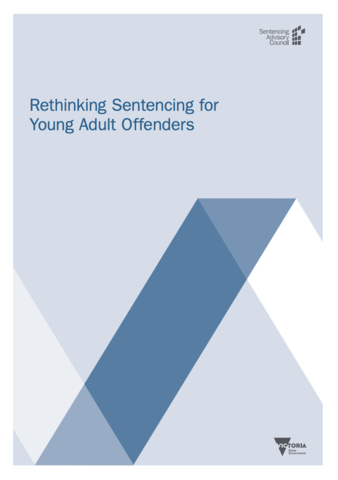 A subset of this group, young offenders aged 18 to 20 at the time of sentencing, are eligible for dual track in Victoria. Dual track allows a court to sentence young offenders to detention in a youth justice centre, rather than an adult prison, providing they satisfy the eligibility criteria.

Young adults offend at higher rates than older adults. As shown below, a large number of alleged offenders in Victoria are aged 15 to 24. The rate declines significantly for alleged offenders aged 25 to 29. This does not take into account the relative seriousness of the offences with which the alleged offenders have been charged nor the frequency of those offences. However, it is clear that young adults commit a disproportionate amount of crime.

There is mounting scientific evidence that young adults aged 18 to 25 are developmentally distinct from older adults and should be treated as such by the justice system. Research in neurology and developmental psychology has demonstrated that cognitive skills and emotional intelligence continue to develop into a person’s mid-20s, and even beyond.

Based on a review of the international literature and consultation with Victorian stakeholders, possible options to better address the particular needs and risks of the 18 to 25 age group in the Victorian sentencing process include: