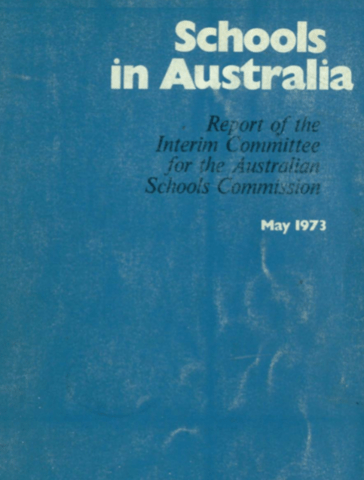 Schools in Australia: report of the Interim Committee for the Australian Schools Commission, May 1973

This is the first time a digitised version of this review on school education, known as the ‘Karmel Report’, has been made available. Tabled in 1973, the report greatly influenced how schools in Australia were funded.

On 12 December 1972 the newly elected Whitlam government appointed an Interim Committee for the Australian Schools Commission. Chaired by Peter Henry Karmel, the Committee was to examine the position of government and non-government primary and secondary schools throughout Australia and to make recommendations on the financial needs of those schools, and the measures to assist in meeting them.

The report identified many inequities in the funding system, which for the first time led to the federal government providing funding to state schools.

Part of the Policy Online digitisation program. Digitisation of this report has been supported by the Australian National Institute for Public Policy at ANU.

Reproduced with permission of the Australian Government Department of Education, Employment and Workplace Relations, 2012.