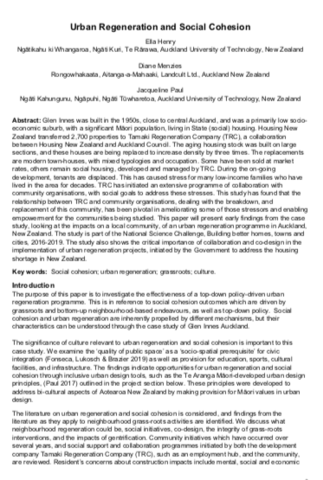 Glen Innes was built in the 1950s, close to central Auckland, and was a primarily low socio-economic suburb, with a significant Māori population, living in State (social) housing. Housing New Zealand transferred 2,700 properties to Tamaki Regeneration Company (TRC), a collaboration between Housing New Zealand and Auckland Council. The ageing housing stock was built on large sections, and these houses are being replaced to increase density by three times. The replacements are modern town-houses, with mixed typologies and occupation. Some have been sold at market rates, others remain social housing, developed and managed by TRC. During the on-going development, tenants are displaced. This has caused stress for many low-income families who have lived in the area for decades.

TRC has initiated an extensive programme of collaboration with community organisations, with social goals to address these stresses. This study has found that the relationship between TRC and community organisations, dealing with the breakdown, and replacement of this community, has been pivotal in ameliorating some of those stressors and enabling empowerment for the communities being studied.

This paper presents early findings from the case study, looking at the impacts on a local community, of an urban regeneration programme in Auckland, New Zealand. The study is part of the National Science Challenge, Building better homes, towns and cities, 2016-2019. The study also shows the critical importance of collaboration and co-design in the implementation of urban regeneration projects, initiated by the Government to address the housing shortage in New Zealand.

Leaving Minto: a study of the economic and social impacts of public housing estate redevelopment