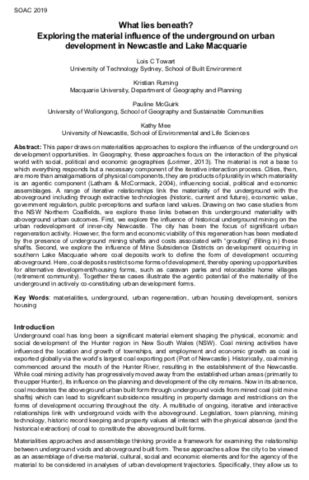 What lies beneath? Exploring the material influence of the underground on urban development in Newcastle and Lake Macquarie

This paper draws on materialities approaches to explore the influence of the underground on development opportunities. In Geography, these approaches focus on the interaction of the physical world with social, political and economic geographies (Lorimer, 2013). The material is not a base to which everything responds but a necessary component of the iterative interaction process. Cities, then, are more than amalgamations of physical components, they are products of plurality in which materiality is an agentic component (Latham & McCormack, 2004), influencing social, political and economic assemblages. A range of iterative relationships link the materiality of the underground with the aboveground including through extractive technologies (historic, current and future), economic value, government regulation, public perceptions and surface land values.

Drawing on two case studies from the NSW Northern Coalfields, we explore these links between this underground materiality with aboveground urban outcomes. First, we explore the influence of historical underground mining on the urban redevelopment of inner-city Newcastle. The city has been the focus of significant urban regeneration activity. However, the form and economic viability of this regeneration has been mediated by the presence of underground mining shafts and costs associated with “grouting” (filling in) these shafts. Second, we explore the influence of Mine Subsidence Districts on development occurring in southern Lake Macquarie where coal deposits work to define the form of development occurring aboveground. Here, coal deposits restrict some forms of development, thereby opening up opportunities for alternative development/housing forms, such as caravan parks and relocatable home villages (retirement community). Together these cases illustrate the agentic potential of the materiality of the underground in actively co-constituting urban development forms.

Fact Check: Is the proposed Shenhua Watermark coal mine located in the middle of Australia's best agricultural land?