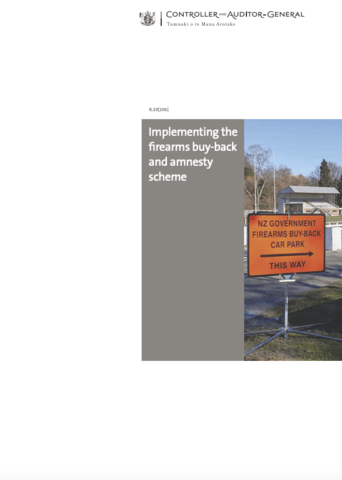 On 15 March 2019, attacks at two Christchurch mosques left 51 people dead and a great many others with injuries that will stay with them for the rest of their lives. The violence on that day shocked and saddened our nation. It deeply affected the Muslim community, the first responders and hospital staff, the residents of Christchurch, and all New Zealanders. Many people had believed that New Zealand was highly unlikely to see such an attack, and the effects were felt worldwide.

As part of the response to the attacks, Parliament passed the Arms (Prohibited Firearms, Magazines, and Parts) Amendment Act 2019 on 11 April 2019. The Act prohibited firearms with the ability to cause harm in a rapid and highly destructive way from a distance.

The Act, supplemented by a set of associated statutory regulations, included a provision for a firearms buy-back and amnesty scheme (the scheme). The scheme allowed owners of newly prohibited firearms, magazines, and parts to hand them in to the New Zealand Police (the Police) in exchange for compensation. The purpose of the scheme was to improve public safety. This report examines how effectively and efficiently the Police implemented the scheme. The appointed auditor, Ernst & Young, provided assurance to the Police during the scheme’s implementation.

The ‘perfect storm’ of gun control: from policy inertia to world leader

"Harmless" .22 calibre rabbit rifles kill more people than any other type of gun

The big melt: how one democracy changed after scrapping a third of its firearms

Locking up guns: foiling thieves, children and the momentarily suicidal

Reinvigorating the Narrative: the broader benefits of the Arms Trade Treaty