This report argues that while email continues to be the most common method by which scams are delivered, the use of landline and mobile telephones, including SMS, to target potential scam victims, has increased.

The Australasian Consumer Fraud Taskforce (ACFT) includes 22 government regulatory agencies and departments in Australia and New Zealand that work alongside private sector, community and non-government partners to prevent fraud. In order to understand the dynamics of consumer fraud victimisation, the ACFT has conducted a range of fraud prevention and awareness-raising activities since 2006. One key activity of the ACFT is to hold an annual consumer fraud survey to obtain a snapshot of the public’s exposure to consumer scams, to assess the range of ways scams can impact on victims and their families, to determine how victims respond to the experience and to identify any emerging typologies and issues.

This report presents the results of surveys conducted in conjunction with the 2010 campaign, Online Offensive—Fighting Fraud Online, and the 2011 campaign, Scams: It’s Personal. Overall, in both surveys it was found that a high proportion of respondents had received a scam invitation, however the majority did not respond. Dating scams attracted the highest number of victims in 2010, whereas in 2011, lottery scams were the most common way in which respondents were victimised.

Although the survey relies on self-reported information, it still provides a useful means of identifying the nature of victimisation and personal fraud trends. Those who perpetrate consumer scams use a wide range of deceptive practices and methods of communication. While email continues to be the most common method by which scams are delivered, the use of landline and mobile telephones, including SMS, to target potential scam victims, has continued to increase. This points to the need for ongoing education on the risks of scam victimisation for those who make use of mobile phones and SMS, particularly younger people. 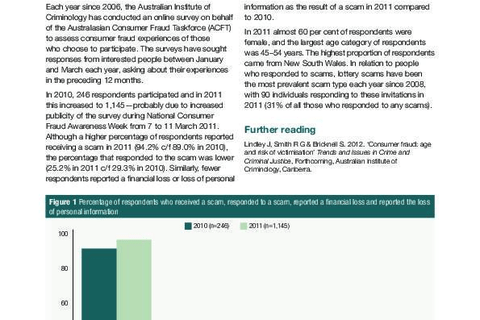 Hackers, fraudsters and botnets: tackling the problem of cyber crime

Consumer fraud in Australia: costs, rates and awareness of risks in 2008

The relationship between age and consumer fraud victimisation