This report assesses the effectiveness of the Department of Broadband, Communications and the Digital Economy’s administration of the Regional Backbone Blackspots Program, including the establishment and ongoing management of the program.

Broadband is considered worldwide to be an important technology that enables the achievement of productivity gains and economic and social development via vastly enhanced communications capacities compared to previous communications technologies.

At the same time, the Minister for Broadband, Communications and the Digital Economy (the Minister) announced the establishment of a company to build and operate a new, superfast NBN; and also announced a measure to develop a backbone network for broadband where there was a lack of competitive wholesale backbone infrastructure and services. This measure was intended to improve broadband services and to fast‐track the installation of some NBN infrastructure. Details of the measure, the $250 million Regional Backbone Blackspots Program (RBBP), were announced by the Minister on 23 April 2009.

The RBBP network comprises some 6000 kilometres of fibre‐optic backhaul across six states and territories, with service‐ready points of interconnection for 100 regions. There is provision for further access points approximately every 10 kilometres along each backhaul route.

Enhancing the competitive supply of backhaul in specific locations via RBBP was intended to assist broadband and telephony providers to improve the range, quality and prices of the services they offered in rural and regional areas. The Government’s objectives for the RBBP were to:

This audit assesses the effectiveness of the Department of Broadband, Communications and the Digital Economy so far in meeting these objectives.

Public broadcasting in Canada and Australia

The community phone project: an overview

Inquiry into the role and potential of the National Broadband Network 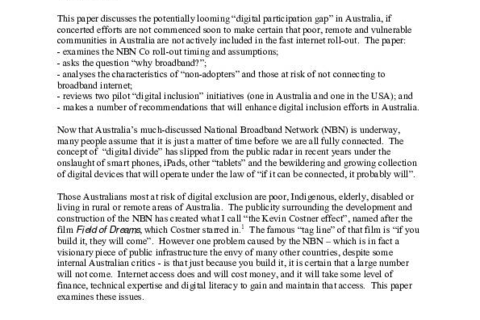 Digital inclusion in the broadband world: challenges for Australia

The priorities and research of non-metropolitan regional development Australia committees