This study examined the question of to what extent Indigenous housing access and tenancy sustainment are influenced by the alignment between different forms of conditionality and Indigenous cultural norms, including family and community obligations.

Purpose of the study

In recent decades, national and international trends towards an increase in welfare conditionality have resulted in the tightening of government rental housing administration provisions in Australia to ensure that tenants conform to mainstream behavioural standards in matters such as good order, financial management, home maintenance and tenancy agreement compliance. This has implications for Indigenous people whose values and lifestyles may not always be aligned with those of the non-Indigenous population. It raises the question of to what extent Indigenous housing access and tenancy sustainment are influenced by the alignment between different forms of conditionality and Indigenous cultural norms, including family and community obligations. This is the question guiding this research which aims to analyse how the intersection between Indigenous and mainstream norms, values, expectations and behaviours influence the successes and failures of welfare conditionality in its goal of supporting positive housing outcomes for Indigenous people. This includes areas such as reducing homelessness, increasing stable housing and achieving improvements in non-housing outcomes such as employment and school attendance.

‘Welfare conditionality’ refers to a form of contractualism in which state benefits are tied to demands that recipients conform to a range of behavioural requirements. Examples include probationary leases, acceptable behaviour contracts and provisions to refer tenants to Centrelink for income management if they fall behind in rental payments. The policy community is divided in its views on the effectiveness of welfare conditionality. Research on its effectiveness suggests mixed results with suggestions that it is most successful when strategies are tailored to client needs and pay attention to the development of respectful relationships. In contexts of cultural difference, success has also been linked to the acknowledgement of the social and cultural capitals of target populations and strategies for building community capacity for self-governance. These findings are critical for Indigenous populations where there is an extensive evidence base on the contribution of incongruent cultural fit of housing design to poor housing outcomes.

Although conditionality appears to be a one-way relationship in which the state imposes demands on citizens, it is always an exchange involving negotiations over differences in values and expectations. This negotiation may not be formally acknowledged but instead may manifest in non-compliance and non-engagement on the part of such citizens, with implications for policy outcomes. Indigenous organisations are also critical players in the relations between Indigenous people and the state. Current research suggests that their location between the Indigenous domain and efforts towards self-determination, and the non-Indigenous domain where they are subject to the state’s mechanisms of administrative control is best understood in terms of the ‘intercultural’ in which Indigenous and non-Indigenous agents work across both sectors in a way that shapes policy development and implementation and also influences self-understandings and perceptions.

Each of the three domains of Indigenous citizens, Indigenous governance organisations and the state, have cross-cutting sets of rights and responsibilities which shape their mutual engagement. In the housing context, the state, through the three tiers of government, must ensure housing of an appropriate standard is accessible and affordable for all citizens. It operates within a regulatory and financial environment and distributes resources to multiple public and private sector organisations, requiring them to meet their contractual obligations in return for the benefits they receive. These organisations include Indigenous governance organisations who have responsibilities to their community and who use their economic resources, and their moral and social connections, to regulate community members. Individuals must also meet their obligations to family, neighbours and kin as well as to housing authorities through requirements to be responsible tenants by, for example, making timely rental payments and behaving appropriately to neighbours.

The idea of a ‘recognition space’ captures these multiple and overlapping sets of rights and responsibilities and proposes that the goals of conditionality to improve Indigenous housing outcomes are best achieved when efforts are made to balance these perceived rights and responsibilities. This perspective of the negotiation space proposes a middle ground in which policy is seen as most effective when it takes place on a shared terrain of social, political and economic exchange, established through negotiated relations of mutual cultural understanding and respect. This framework extends the idea of conditionality to one involving moral relationships of duty and care between the individual, Indigenous formal and informal governance structures, and the state and its agents.

This analysis gives rise to the following four questions, which will guide this study:

1. What are the characteristics of different types of housing conditionality and how effective are they in achieving positive housing outcomes for Indigenous people?

2. How does the intersection between these types of housing conditionality, and Indigenous lifeworlds and Indigenous governance arrangements, influence housing outcomes for Indigenous people?

3. Is there an identifiable form of conditionality which enables a recognition space that permits a shared understanding of the values and constraints of government workers, Indigenous tenants, housing managers and community leaders? What are the conditions of its emergence, and to what extent does it support improvements in Aboriginal housing?

4. Are there identifiable good practice and policy principles that have specific use in particular contexts or that are useful across all contexts that can be elicited from this analysis?

Presentations from the National Homelessness Conference 2018

Flexible guidelines for the design of remote Indigenous community housing 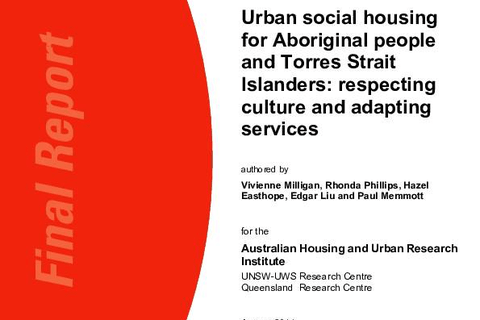 A blueprint for action for regional Indigenous homelessness projects

Report of outcomes of the recommendations of 'Accommodating Everyone'