This research aimed to understand more fully the phenomenon of downsizing in the Australian context including: the extent of downsizing amongst older Australians; who downsizes and why; and what is involved in the process.

The context of this research is the ageing population in Australia and its implications for housing and urban development. Ageing in place is a key policy response to population ageing, but this begs the question: ageing in what kind of place? It is well established that a significant majority of older Australians live in detached suburban dwellings of three or more bedrooms which are often regarded by policy-makers as under-utilised. Much urban policy is premised on the assumption that an ageing population will require more diverse (implying smaller) housing stock into which older people will (or should) downsize. However, little is known about older people’s downsizing behaviours.

The broad aim of this research was to understand more fully the phenomenon of downsizing in the Australian context including: the extent of downsizing amongst older Australians; who downsizes and why; what is involved in the process; what are the outcomes; what obstacles discourage downsizing; and what policies could facilitate downsizing where appropriate and desired by older people.

This project accepts a broad definition of downsizing which encompasses a decrease in dwelling size (i.e. number of rooms and/or spatial dimensions), and/or garden/yard area), and/or monetary value. However, for practical purposes a reduction in the number of bedrooms is used as a proxy for downsizing in analysing ABS and other survey data.

For the purposes of this study, older people are regarded as those aged 50 years or over, in order to capture the pre-retirement cohort who may be making decisions about their housing futures. ‘Older Downsizers’ are therefore those who have moved to a dwelling with fewer bedrooms since turning 50 years of age. Another category, ‘Other Movers’ are those who changed their dwelling without reducing the number of bedrooms. Both homeowners and tenants are included in the study, along with residents of retirement villages under loan/lease tenure.

The research is approached from a person–environment theory perspective. The following methods were used in the study:

The AHURI questionnaire survey did not attempt to collect data on older people who had not moved since turning 50. Hence, demographic comparisons with the population of older non-movers was not possible. 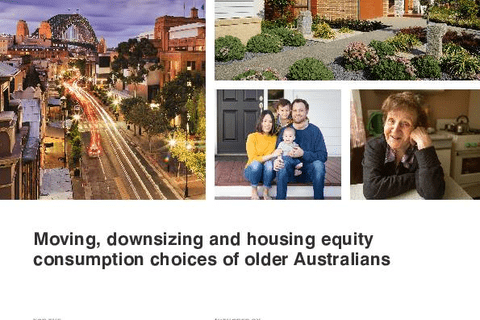 Who works beyond the 'standard' retirement age and why?

Retirement decisions of couples: the impact of spousal characteristics and preferences on the timing of retirement

Your rights at retirement: a guide to making decisions and navigating your entitlements in later life

Australians' super savings may be bigger than thought, report finds

Retired Australian’s use of information technology: a preliminary study