This paper presents estimates for economic freedom rankings of the six Australian states.

Economic freedom, or the ability of individuals to justly and non-coercively acquire, use and dispose of property as they each see fit, has long represented an animating principle of Western societies. The experience of history, and not to mention empirical studies, affirm the notion that greater levels of economic freedom tend to be associated with increasing economic prosperity and improved social wellbeing.

Despite these benefits, governments have long engaged in activities to restrict economic freedom through excessive taxation, public spending and debt which misallocate scarce resources; providing social security benefits which quell incentives to work and save in the productive sector; and imposing regulatory burdens restricting the exercise of entrepreneurship by private sector economic agents.

Australian governments at all levels interfere with our economic freedoms on a daily basis. In the absence of information it is difficult for taxpayers and citizens to determine which government is imposing policies more egregious to maintaining economic freedom, and the detrimental flow-on effects for long term economic and social improvements.

There is a need to fill in this information gap with an Australian economic freedom index.

This study contributes to the burgeoning economic freedom literature by providing rankings of relative economic freedom for the six Australian states in 2011. Indeed, this study is the first of its type for Australia, and follows many years of quantitative research undertaken by the likes of the Fraser Institute and Heritage Foundation comparing Australia's economic freedom ranking with that of other countries.

An economic freedom index is developed which is composed of indicators pertaining to the level of expenditure, taxation and other fiscal activities, the extent of direct dependency by the population on governments for their income, and the regulatory environment maintained by governments.

The indicators are derived from statistics of state and local government activities (where available) and, given the extensive federal involvement in Australian fiscal and regulatory affairs, the statistical information is then supplemented by data on commonwealth government activities depending on availability and applicability. The information used to construct the indicators, and ultimately the economic freedom index value, is drawn from publicly available sources and may be replicated by interested parties for their own purposes.

Studies have also emerged which include economic freedom considerations alongside a broader suite of personal freedom indicators. For example, the Mercatus Center Freedom in the 50 States ranks the relative freedom of the US states using numerous economic, fiscal, personal and regulatory freedom indicators.

While this study does not assume the more comprehensive approach to quantifying relative personal freedom rankings, similar to that of the Mercatus Center research, in many respects it still provides a more comprehensive account of factors likely to affect economic freedom than most other available economic freedom indexes. In particular, the inclusion of government dependency and regulatory environment variables can be regarded as advances in this respect. 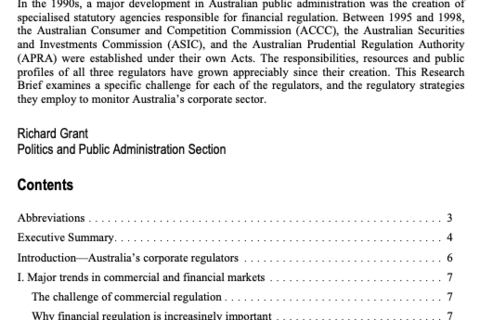 Prevention of collusion for innovative construction

Competition and productivity: do commonly used metrics suggest a relationship?