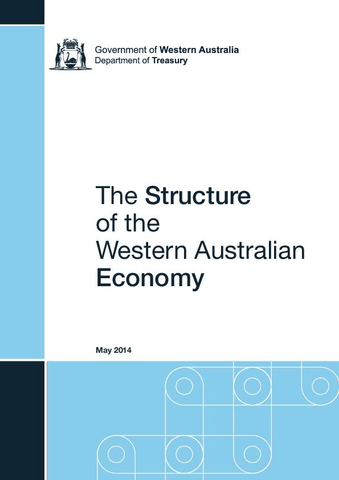 This paper examines the underlying structure of the Western Australian economy and its transformation over the past ten years. The industries examined are mining and petroleum, manufacturing, services, construction, agriculture, forestry, fisheries, tourism, energy, water, waste; and non-market activities such as public administration and safety, education and health care. The analysis of each industry and its contribution to the Western Australian economy is based on the value of production (or output/supply) and is presented in nominal or current (nominal) price terms (i.e. the prices that prevailed at the respective point in time) as gross value-add by industry. This approach is used to provide an insight to the structure of the economy at any point in time, based on the price levels that prevailed. Economic growth rates and growth rates by industry are presented in real (chain volume) terms to provide a better indication of movements in real output over time.

The paper identifies that over the past decade, from 2002-03 to 2012-13, the State’s abundance of natural resources which, along with the close proximity to Asia, has led to an increased dominance of the mining and petroleum industries in the economy. Higher commodity prices and strengthening demand for resources (particularly energy and iron ore) from emerging economies such as China led to significant levels of investment in the State’s mining and petroleum industry. Over the decade China became Western Australia’s number one export destination. The mining and petroleum industry’s share of Gross State Product has varied during the past decade. From less than one-fifth in 2003-04, the industry’s share increased to over one-third in 2010-11, before moderating to around 30% in 2012-13. The rapid growth and rising influence of the mining industry over the decade benefited other industries of the economy, particularly construction (through business investment and engineering construction) and manufacturing (through the downstream processing of minerals).

The paper concludes with an analysis of the impact of the changing structure of the State’s public sector finances over the past ten years. Although the rapid expansion of the mining and petroleum industry boosted the State’s own-source revenue, particularly royalty income, it resulted in a sharp decline in the State’s share of GST revenue grants. The strong rate of economic growth, and a corresponding acceleration in the State’s population growth during the period, increased the demand for social and economic infrastructure, and core services such as health and education.

How much did the 2009 fiscal stimulus boost spending?

The myth of the shrinking state? What does the data show about the size of the state in New Zealand, 1900-2015

The challenges of aid dependency and economic reform: Africa and the Pacific