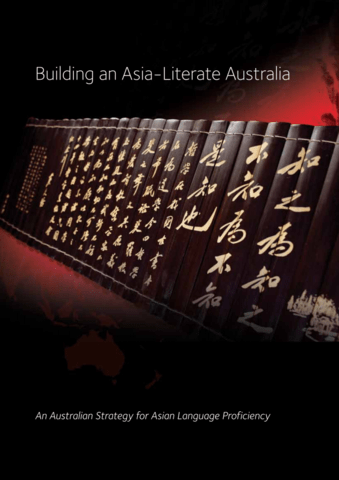 Australia needs half of the population to be fluent in an Asian language within 30 years or risk falling behind other countries, this report has found.

Australia must abandon its monolingual mindset to keep pace with economic and political power houses of China, India, Japan and Indonesia, according to this study by Griffith Asia Institute Director Professor Michael Wesley.

“Most of the world is multilingual and investing more in learning other languages and cultures,” Professor Wesley said. “The knowledge of more than one language gives a person an edge in judgement and competence, by allowing them to see the world from a different perspective.”

The research looked at four phases: a review of current Asian language teaching in Australia; study of past programs promoting and funding Asian language study in Australia; policies used by other countries and lastly, feedback from students, teachers, parents, schools and other stakeholders.

The report outlines the $11.3 billion, 30 year plan over three implementation phases. It aims to integrate a teaching program from early primary school through to university level.

It’s based on five principles:

The research was co-ordinated and conducted by a task force of Michael Wesley, Adam Illman and Deborah Kessler, with costings by Ruth Gatehouse.