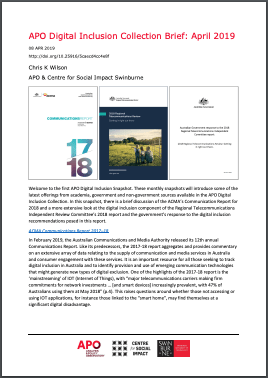 Welcome to the first APO Digital Inclusion Brief. These monthly snapshots will introduce some of the latest offerings from academia, government and non-government sources available in the APO Digital Inclusion Collection. This month there is a brief discussion of the ACMA’s Communication Report for 2018 and a more extensive look at the digital inclusion component of the Regional Telecommunications Independent Review Committee’s 2018 report and the government’s response to the digital inclusion recommendations posed in this report.

In February 2019, the Australian Communications and Media Authority released its 12th annual Communications Report. Like its predecessors, the 2017-18 report aggregates and provides commentary on an extensive array of data relating to the supply of communication and media services in Australia and consumer engagement with these services. It is an important resource for all those seeking to track digital inclusion in Australia and to identify provision and use of emerging communication technologies that might generate new types of digital exclusion. One of the highlights of the 2017-18 report is the 'mainstreaming' of IOT (Internet of Things), with "major telecommunications carriers making firm commitments for network investments … [and smart devices] increasingly prevalent, with 47% of Australians using them at May 2018" (p.4). This raises questions around whether those not accessing or using IOT applications, for instance those linked to the "smart home", may find themselves at a significant digital disadvantage.

In Australia, geography continues to play a key role in shaping the contours of digital inclusion. Those living outside the major cities have commonly fared worse than their urban counterparts when it comes to telecommunications infrastructure provision and access. This prompted the federal government to establish a triennial review process to be conducted by an appointed Regional Telecommunications Independent Review Committee (RTIRC).

At the end of September 2018, the RTIRC submitted its 2018 report on the "adequacy of telecommunications services in regional, rural and remote parts of Australia" (p.12). This was the fourth report in the series (other reports were released in 2008, 2011-12, and 2015). The review included an extensive examination of digital inclusion issues and made specific recommendations about digital inclusion and digital literacy.

The RTIRC gathered material through 22 public face-to-face consultations across regional Australia and more than 380 submissions from members of the public and key groups representing regional Australians. The committee concluded that “digital inclusion in the regions lags far behind the major cities” and notes that this impacts access to government and other essential services, including education (p.6). They suggested the need to broaden the policy focus from simply building new telecommunications infrastructure so as to address digital literacy issues that would ensure “people are getting the most out of their improved connectivity” (p.8). Affordability is also considered a significant concern, with the committee noting that “the higher proportion of low income households in regional and remote Australia makes digital affordability a key barrier to digital inclusion” (p.7). The report highlights the need for a targeted approach to addressing digital inclusion issues for Indigenous Australians living in remote communities. It is, they suggest, “time to address the structural and skills issues that are holding back many from getting the economic and social benefits of digital technologies and services” (p.7).

The government pointed to some changes to the NBN Sky Muster product offering that would unmeter some essential internet services as a response to Recommendation 7. Rural telecommunication consumer advocates were generally pleased with this change.

In relation to Recommendation 8, the government expressed agreement in principle with the development of an Indigenous Digital Inclusion Plan and noted that it would work through existing Indigenous consultative mechanisms to ensure a tailored response.

While the government agreed in principle with the need to reduce barriers impeding people actively engaging and receiving the benefits of using essential services online (Recommendation 9), there was no commitment to a general unmetering of data for accessing government sites. Instead, the government suggested that further work is needed to determine which consumer groups would most benefit most from unmetering and how this might best be achieved.

With regards to Recommendation 10, the government committed to developing an online technology 'hub' that would provide independent and factual information about the choices of digital technologies and applications. Only once that hub is established would the need for 'on the ground' technical advisers be assessed. In relation to the need to boost information in the agriculture sector about Internet of Things and other digital applications, the government notes that the Minister for Agriculture and Water Resources has asked the agricultural Research and Development Corporations and the National Farmers' Federation to further their work in this area.

Recommendation 7: The existing data limits for Sky Muster services be reviewed with the aim of increasing data limits across the board. As a minimum, the spot beams that are underutilised should have data limits increased.

Recommendation 8: A targeted Indigenous Digital Inclusion program with a focus on access, affordability and digital ability be developed in partnership with Indigenous communities.

Recommendation 9: Governments and industry should reduce barriers to people engaging with essential services online, including unmetering data for access to government sites.

Recommendation 10: The Government commit to improving digital literacy in regional, rural and remote Australia by: (a) developing an online technology ‘hub’ to provide independent and factual information to help support people to build up the skills to solve telecommunications issues; (b) deploying technical advisers on a short-term basis across regional, rural and remote Australia to provide on-the-ground support to help people get connected and stay connected, using technologies that are suitable to their individual needs; and (c) encouraging the agriculture sector to provide industry-specific advice about the Internet of Things and other digital applications that will drive productivity gains in the sector.

The APO Digital Inclusion Collection features reports, commentary and other grey literature related to digital inclusion in Australia and internationally. The collection is supported by the Centre for Social Impact at Swinburne University.

Dr Chris K. Wilson is curator of the APO Digital Inclusion Collection. Chris is a Research Fellow with the Centre for Social Impact at Swinburne University of Technology and principal analyst for the Australian Digital Inclusion Index (ADII) project.

2018 Regional telecommunications review: getting it right out there https://apo.org.au/node/209271

Framework for the future https://apo.org.au/node/16852