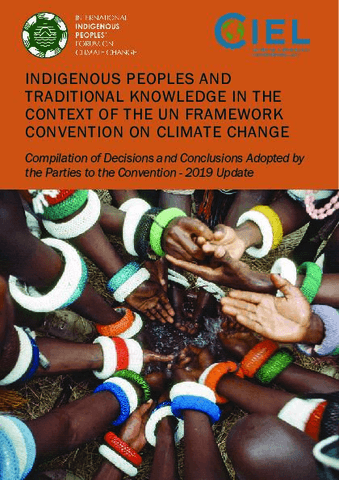 Even though Indigenous Peoples contribute little to greenhouse gas emissions, owing to their dependence upon and close relationship with the environment and its resources, they are among the first to face the direct consequences of climate change in all areas of the world. To make matters worse, climate policies often further undermine the rights of Indigenous Peoples by imposing new restrictions on their relations with natural ecosystems or by leading to forceful relocations motivated by energy or infrastructure projects.

This text compilation offers a useful tool for all actors involved in climate policies and climate actions, including governments, private corporations, and financial institutions. It lists all of the references to Indigenous Peoples and traditional knowledge adopted by the UN Framework Convention on Climate Change (UNFCCC) bodies. These references, mandates, and commitments constitute a floor, as many national and international legal frameworks extend beyond the references adopted by the UNFCCC. The rules, principles, and norms established under the climate agreements are complementary to other norms adopted by governments on this issue.

Managing the uncertainty and risks of climate change

Heat, humanity and the hockey stick: climate change and sport in Canberra

Moving people in a changing climate: lessons from two case studies in Fiji

The nexus between climate change, mental health and wellbeing and Pacific peoples