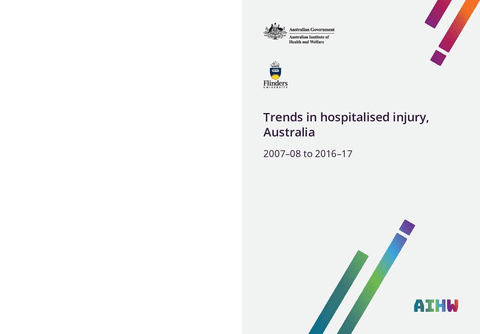 This report describes trends in the occurrence of injuries requiring hospitalisation in Australia (in both public and private hospitals) during the 10-year period from 1 July 2007 to 30 June 2017. Injury is described according to major types of external causes of injury. The report covers injuries that occurred in community settings—such as car accidents; interpersonal violence; sporting and recreational activities; and work—but health-care-associated harm is not included.

Only a small proportion of all incident injury cases result in admission to a hospital. For each hospital admission, many more cases present to hospital emergency departments but are not admitted, or are seen by a general practitioner. A larger number of generally minor cases do not receive any medical treatment. In addition, a smaller number of severe injuries that quickly result in death go unrecorded in terms of hospital separations, but are captured in mortality data. Although injury cases admitted to hospital comprise only a small proportion of the number of incident cases of injury, however, they account for a large proportion of estimated costs of injury.

The external-cause categories presented in this report differ slightly from those in previous editions of the Trends in hospitalised injury series. The following changes have been made:

Considering social licence to use personal health information for research

Beyond wellness for the healthy: digital health consumer adoption 2018

Health at the centre: responsible data sharing in the digital society

From principles to practice: benchmarking government guidance on health apps

YouGov survey shows UK public strongly support the analysis of anonymised NHS patient data for medical research, but do not support this being conducted by multinational tech companies

The collection, linking and use of data in biomedical research and health care: ethical issues