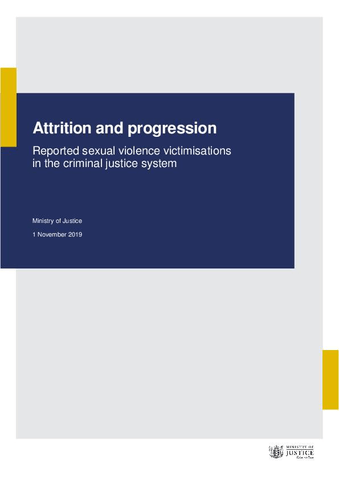 Trends for people charged with or convicted of sexual violence offences are reasonably well understood. However, the same cannot be said for sexual violence victims and the experiences they report to Police; where research has been undertaken it has not provided a complete view.

The Wellbeing Budget 2019 included funding to support initiatives to prevent and respond to sexual violence. As a result, it is anticipated that over time more people will report victimisations to Police, more will progress to court following investigation, and more perpetrators will be convicted.

This research quantifies the proportion of reported sexual violence victimisations that currently progress through the justice system to a conviction. Additionally, it aims to determine if differences exist over time, for children and young people, adults reporting historic childhood offences, different offence types, Māori and different perpetrator relationship types. An initial analysis of the time taken to progress through the system is also undertaken.

A large-scale analysis of this type has not previously been undertaken in New Zealand. It differs from previous research, in that it includes all sexual violence victimisations reported to Police over a four-year period and includes both adult and child victims.