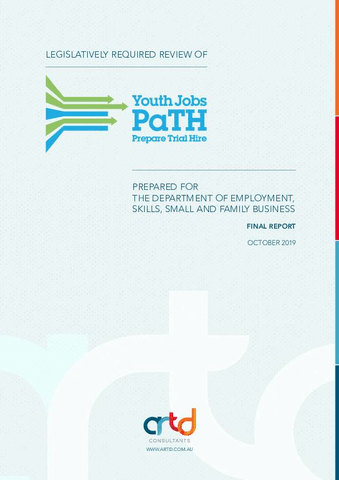 This review of Youth Jobs PaTH was conducted by ARTD Consultants between March and May 2019 in accordance with Section 243A(1) of the Social Security (Administration) Act 1999, which requires the Employment Minister cause a review to be conducted into the operations of Youth Jobs PaTH.

The review findings are based on what the ARTD review team can reasonably conclude on the evidence examined. The review did not consider fraud and was not an audit of Youth Jobs PaTH. The review should not be construed as seeking to provide any legal opinion regarding Youth Jobs PaTH in any general or specific sense.

The following key risks identified through review of comments by Senators and responses of the Australian Government and considered by the review were:

The review found that job seekers, interns, host businesses and employers are provided with information and resources to understand their rights and responsibilities. Documentation sets out that an internship is voluntary – 87 per cent of interns reported that they were told that their internship was voluntary, 7 per cent of interns reported that it hadn’t been explained and 6 per cent didn’t know if it had been explained. While a small proportion of interns may not be sufficiently aware the internship is voluntary, there is substantial evidence that interns were able to voluntarily end their internships early. It appears that 34 per cent of internships ended early and in 50 per cent of those cases it was ended by the intern. Further investigation in cases where it appears an intern may not be aware of the voluntary nature of the internship from survey or complaints data may identify issues with particular providers and allow for rectification.

Experience or exploitation? The nature, prevalence and regulation of unpaid work experience, internships and trial periods in Australia

Youth voice for the future of work

ASEAN youth: technology, skills and the future of work