The Australian private hospital insurance system is unsustainable in its present form. The system faces a death spiral – younger and healthier consumers get a bad deal, so they’re dropping their insurance, which means premiums need to rise, so even more young and healthy people drop out, and the cycle continues.

This youth exodus means the recent moderation of premium increases is likely to end, and premiums will probably return to increasing at 5 per cent or more each year. By 2030 private health insurance is likely to cover less than 40 per cent of the population.

Private health insurers are strangled by red tape. The government requires that insurers charge everyone in each state – young and old, sick and healthy – the same insurance premium, under the ‘community rating’ principle. Insurers’ incentives are blunted by regulation. If an insurer bargains hard with hospitals, acts to keep members healthy, or innovates to reduce treatment costs it loses much of the benefit to other insurers through a process called risk equalisation.

The Commonwealth spends nearly $5 billion a year subsidising private hospital insurance – and another billion or so on ‘general’ or ‘extras’ insurance – at questionable value for money. Subsidising private health care might be worth it if it takes the pressure off the public system. But the evidence suggests that the cost of the subsidy to the budget is much larger than the amount it saves in public health care.

This report proposes policies that will help the private health insurance industry become sustainable as the population ages. Change is needed, but a gradual industry transition will ensure there is no disruption to the health care, including the public system. 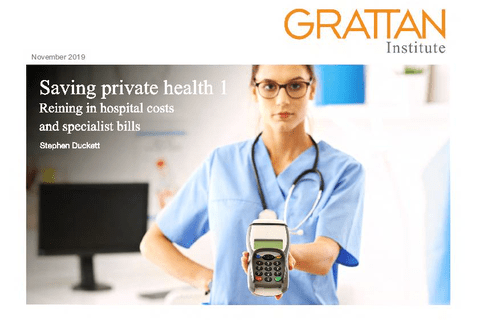