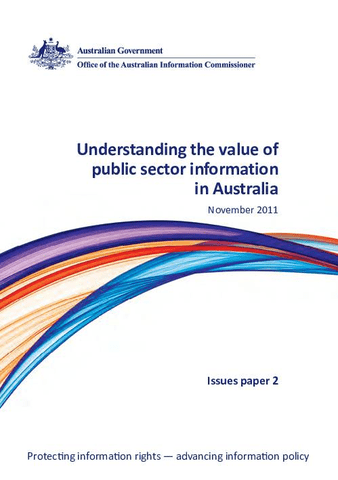 The Government 2.0 taskforce recommended that the OAIC develop a methodology for reporting to government on the value generated by the publication of public sector information (PSI).

The term 'public sector information' appropriately describes the information gathered by government and captures its intrinsic value. In essence, it is a national resource and there are corresponding obligations on government officers to ensure that it is managed responsibly and astutely.

A key objective in government information management must be that public sector information (PSI) is made available to the community as openly as possible and is both discoverable and reusable. This was the central message in the 2009 report of the Government 2.0 Taskforce. The taskforce envisaged a role for the Office of the Australian Information Commissioner (OAIC) in promoting open PSI and recommended that the office develop a methodology for agencies to report annually to government on the value generated by published PSI.

This paper commences that process. The first step is to build a better picture of the PSI landscape in Australia. Initially, agencies must be supported in gathering the necessary data, so that a methodology for evaluating that data can be applied.

The paper proposes that the survey be administered by the OAIC in May 2012, following public consultation on the ideas presented in this paper. The survey will be administered both to government agencies and to re-users of PSI. The information collected in the survey will then be used by the OAIC in at least three ways. One will be in a public report by the OAIC on the Australian PSI landscape and the value of publication. The second will be in developing a methodology for valuing PSI, as envisaged by the Gov 2.0 taskforce. The third will be in discussion between the OAIC and the newly-appointed Information Advisory Council, in developing advice to government on national information policy.

The OAIC welcomes submissions by 31 January 2012 on three issues:

1.1 The ideas presented in this Issues Paper: does the paper propose a workable approach for mapping the PSI landscape and developing a methodology for valuing PSI?

1.2 The draft survey form in the Appendix to this paper: is the survey form appropriately framed to address the right issues and gather useful information?

1.3 The literature survey in Part 4 of the paper: does this survey adequately cover the field, and are their gaps or limitations in the existing research?

Discussion paper: Review of the Freedom of Information Act 1989

The imaginary politics of access to knowledge: whose cultural agendas are being advanced?

The right to information: reviewing Queensland's Freedom of Information Act

Discussion paper: Review of the Freedom of Information Act 1989