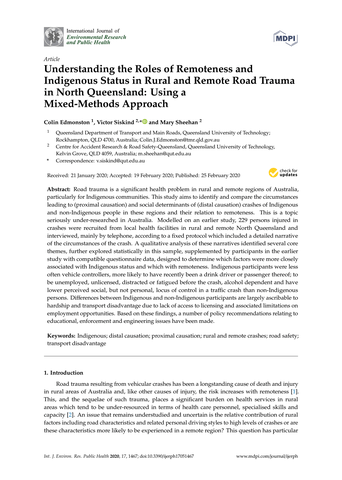 Understanding the roles of remoteness and Indigenous status in rural and remote road trauma in North Queensland: using a mixed-methods approach

Abstract:
Road trauma is a significant health problem in rural and remote regions of Australia, particularly for Indigenous communities. In this study, differences between Indigenous and non-Indigenous participants are largely ascribable to hardship and transport disadvantage due to lack of access to licensing and associated limitations on employment opportunities. Based on these findings, a number of policy recommendations relating to educational, enforcement and engineering issues have been made.

Objective:
This study aims to identify and compare the circumstances leading to (proximal causation) and social determinants of (distal causation) crashes of Indigenous and non-Indigenous people in these regions and their relation to remoteness.

Importance of Study:
This is a topic seriously under-researched in Australia. The overrepresentation of Indigenous Australians in road trauma and common crash types are consistent with the First Nations experience in New Zealand, United States and Canada. Improvements over time in the New Zealand (Maori) context has potential to inform the  way Indigenous road safety is delivered in Australia.

Methods:
Modelled on an earlier study, 229 persons injured in crashes were recruited from local health facilities in rural and remote North Queensland and interviewed, mainly by telephone, according to a fixed protocol which included a detailed narrative of the circumstances of the crash. A qualitative analysis of these narratives identified several core themes, further explored statistically in this sample, supplemented by participants in the earlier study with compatible questionnaire data, designed to determine which factors were more closely associated with Indigenous status and which with remoteness.

Conclusion:
It was clear that the conventional messages on road safety directed at the general Australian public have little meaning for Indigenous communities in rural and remote areas. Efforts to promote road safety in such communities need to go hand in hand with steps to ameliorate their life circumstances. Given the high rate of passenger and pedestrian road crash injuries comparatively, an increased focus on developing safety messaging for these road user groups should be a priority, extending the current focus on driver-based education.

Towards Safe System infrastructure: a compendium of current knowledge

Heavy vehicle safety and use of technology to improve road safety

Guidance on median and centreline treatments to reduce head-on casualties