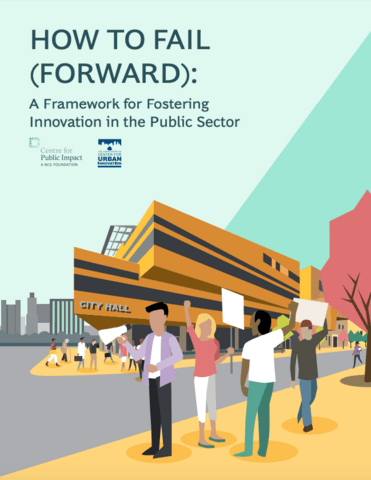 How to fail (forward): a framework for fostering innovation in the public sector

Well before COVID-19 presented local governments with some of the greatest obstacles of the modern era, public institutions across the United States faced issues already rapidly increasing in their complexity and magnitude. Many sought out innovation as a means to address these issues.

While the word “innovation” is often associated with complex experiments that only a handful of people with specialised skills get to participate in, we believe innovation means anything that makes things better for people. At its core, all innovation, from common process improvements to complex experiments, starts with failure. In its most fundamental form, this process entails identifying that something has not gone according to plan (i.e., that a failure occurred) and, learning from that failure (or failing forward). Innovation begins to take shape through the testing and iteration of new ideas to determine what works best — and learning from the things that do not work is as critical as learning from what does.

Despite its importance in the innovation process, learning from failure is very difficult. It is challenging to admit to oneself that a failure occurred and more challenging still to admit it to others. In government, where the stakes are higher and the resources tighter, talking about failures can be an anxiety-inducing, stressful experience. So stressful indeed, that many avoid it whenever possible.

And yet — failing forward is critical to a government’s ability to innovate, and therefore, to make things better for people. With this in mind, this project considers two basic research questions. Why is it so hard to learn from failure in government? What can leaders and their allies do about it?

The findings in this report are principally informed by on-the-ground research with the six local governments, 20 departments, and over 150 public servants who participated in Failure Foundries. These day-long workshops enabled government employees to identify internal challenges to learning from failure and develop action plans to address these challenges. We supplemented this research through interviews with 25 city leaders from all over the country and a literature review on relevant topics, including organisational learning, the psychology of failure, and human learning systems.