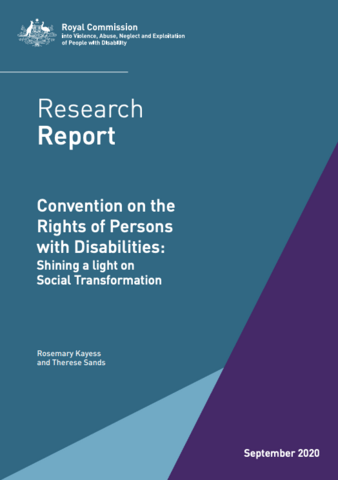 Convention on the Rights of Persons with Disabilities: shining a light on social transformation

The Royal Commission into Violence, Abuse, Neglect and Exploitation of People with Disability (the Royal Commission) commissioned the Social Policy Research Centre (SPRC) at the University of New South Wales (UNSW) to undertake the research, critical analysis and preparation of this report. The method used to prepare this report is presented in Appendix A.

The aim of the report is to describe the international human rights context in which the Royal Commission operates. The Royal Commission has been established with Terms of Reference that explicitly recognise the obligations contained in the United Nations Convention on the Rights of Persons with Disabilities (CRPD).

There has been evidence for many years about the unacceptable levels of all forms of violence, abuse, neglect and exploitation against people with disability, which led to the campaign for the Royal Commission, outlined in Section 2 of this report. This campaign can be understood in the context of the broader experience of inequality, discrimination and segregation that has defined the lives of people with disability, and is described in Section 3.

The experience of inequality, discrimination and segregation was the catalyst and the frame of reference for the emergence of the disability rights movement in the 1960s and 1970s. Section 4 outlines the critical role of this movement in the formulation of a new conceptualisation of disability, now known as the social model of disability. This social model formed the basis for critical disability analysis and concerted disability advocacy over many years, and was central to the push for the development of a human rights convention on disability.

Section 5 outlines the failures of existing international human rights law prior to the CRPD, in addressing the inequality, discrimination and segregation experienced by people with disability.

Section 6 outlines how the CRPD was negotiated and the central role of people with disability through their representative organisations in these negotiations.

The CRPD is a binding human rights treaty that establishes normative standards and principles for international human rights law. Australia is legally obliged under international law to ensure that the CRPD is implemented throughout the country by the Commonwealth, States and Territories in their areas of responsibility. In Section 7, the core elements of the CRPD and its dynamic nature are outlined. It explains the link between the human rights model of disability inherent to the CRPD, and a new concept of equality – transformative equality – that provides the roadmap for social transformation.