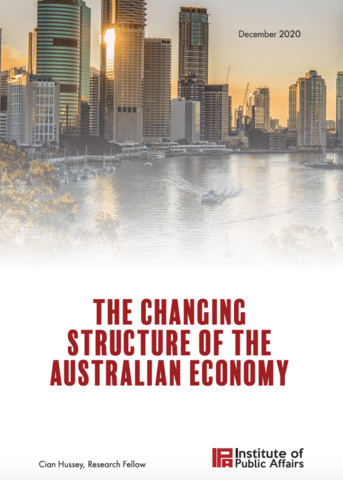 The changing structure of the Australian economy

One of the existential challenges to the Australian way of life arises from a small group of elites who have captured the Australian economy at the expense of working and middle-class Australians and small business owners.

Australia has long been a robust asset-owning democracy. Small business creation, home ownership, access to work, and control over personal and retirement finances in particular have given Australians a stake in their local communities, the success of the economy, and the future of the country. However, a number of structural changes have been occurring which undermine the Australian way of life, including declining rates of home ownership and small business creation, the loss of control over retirement savings to superannuation funds, and high rates of underemployment and youth joblessness.

This paper assesses these structural changes by analysing the distribution of factor income, which can broadly be divided into capital and labour income. Simply stated, factor income measures the share of gross domestic product (GDP) that can be attributed either to workers or owners of capital. Income attributed to workers is referred to as labour income and is comprised of total remuneration, the largest component of which is wages. Income attributed to owners of capital constitutes capital income. There is a third, separate category, called “mixed income” which, as the name suggests, is income which cannot be delineated neatly between its composite labour or capital components. It is standard in the literature for mixed income to serve as a proxy for the self-employed and family businesses, as explained later in this paper.

This report begins by providing an overview of factor income and discusses how it can be broken down into its components. It then demonstrates the stability of the labour share of factor income and discusses how national accounts statistics can be misrepresented to paint a false narrative that workers are exploited to the benefit of capital income. The report then presents two findings that indicate a concerning change in the structure of the economy. The first is that 65% of the increase in the share of capital income since 1960 has been driven by increasing housing income and the growing financial services sector. The second is that, where corporate income has increased, this has come at the expense of family businesses and the self-employed, rather than at the expense of workers.

This paper concludes by offering some policy recommendations. Rather than focusing on the false narrative that workers are not receiving a share of national income commensurate with their contribution, policy-makers should be concerned with what the composition of capital income reveals about the structure of the economy.