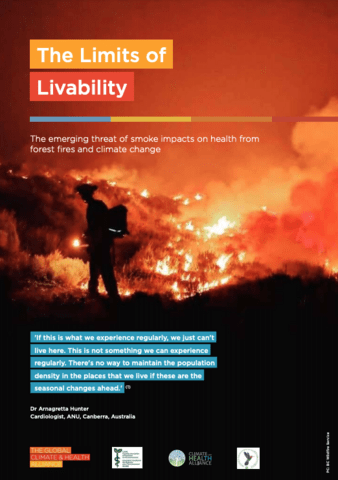 The limits of livability

In 2019, extensive forest fires in the Amazon followed by the worst bushfires in Australia in living memory, fires which raged for five months, sparked international concern. Both devastating events took place to a backdrop of wildfires recorded around the world in 2019 and 2020.

Forest fires in the Amazon are deliberate, driven by land clearing for intensive agriculture and ranching, and contribute to climate change by releasing forest carbon stores. The extreme fires witnessed recently in temperate forests around the world are, in part, fuelled by climate change. The risk of wildfires is projected to increase as climate change intensifies.

Whether a climate change driver, or a consequence of global warming, forest fires now cause episodes of extremely poor air quality that can affect very large populations. In Australia, for example, 80% of the population were affected by smoke pollution in the 2019/2020 fires.

Health impacts increase in step with incremental increases in air pollution and are seen especially in children, the elderly and those with existing chronic medical conditions. People who spend more time outdoors are more vulnerable, along with older people over 65, people with asthma, chronic obstructive pulmonary disease (COPD) and cardiovascular disease. Modest rises in pollution levels can have major population health impacts if enough people are exposed or the smoke persists for a long time.

This report, along with three case studies from Australia, Brazil and Canada, warns that worldwide, governments must act to prepare public health systems for the impacts to the public from recurring air pollution episodes from fires caused by the climate crisis, deforestation practices, and poor land management.