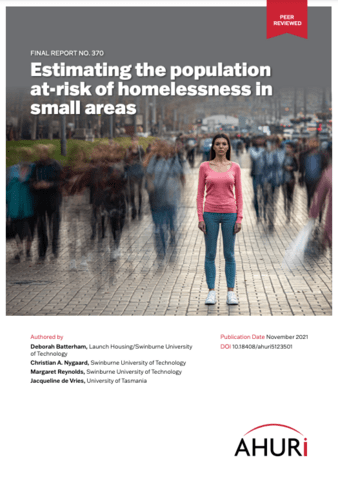 Estimating the population at-risk of homelessness in small areas

This research produces Small Area Estimates (SAE) of the population at-risk of homelessness in Australia.

The incidence of homelessness risk is measured as a rate per 10,000 residents aged 15 years and over, at the ABS defined spatial scales Statistical Area level 2 (SA2) and Statistical Area level 3 (SA3). SA2s typically have a population ranging from 3,000 to 25,000 persons and can be thought of as a suburb or small group of related suburbs; SA3s are an aggregation of SA2s and have a population ranging from 30,000 to 130,000.

The highest rates of risk are found in remote areas and in selected areas of capital cities. The greatest number of people at-risk are living in greater capital cities on the eastern coast of Australia, in both central and suburban locations.

The policy challenge is two-fold. Firstly, addressing the factors that put an individual at-risk of homelessness, in particular localities. This requires policies that target individuals and groups at particular risk. Secondly, just because the rate of homelessness risk is low, this does not mean that the magnitude of the issue necessarily is small. This requires policy awareness and agenda-setting also in some areas where the risk of homelessness otherwise is moderate or low.

The spatial dynamics of homelessness in Australia 2001–2011