Australians are paying too much for prescription drugs. The cost of this overpayment is at least $1.3 billion a year, or $3.5 million a day. This equates to 14 per cent of the entire Pharmaceutical Benefits Scheme (PBS) budget. In a time of escalating health costs and other strains on the Commonwealth Budget, spending on pharmaceuticals could be reduced relatively easily, if there is the political will to do so.

Several good examples show the way. In New Zealand, drug prices have plunged dramatically, freeing up money to spend on new drugs and other kinds of care. New Zealand’s secret is simple. The Government has taken the politics out of price-setting and appointed independent experts to make decisions. It has also capped the budget for drugs, which ensures clear priorities and tough negotiations with pharmaceutical companies.

For Australia’s PBS, by contrast, decisions on drug pricing are opaque and unconstrained by a budget. Key decisions are made by a committee inside the Department of Health and Ageing that includes among its six members two representatives of drug companies. They have little interest in keeping prices low.

In New Zealand, politicians decide how much is spent on drugs in total, then independent experts negotiate prices. In Australia, expert judgements come first but can be overridden by political decisions. No one assesses how much we should spend overall. As a result, our wholesale prices for identical drugs are now more than six times New Zealand’s. In some cases, they are more than 20 times higher.

One drug alone, atorvastatin, has cost the Australian Government and individual patients more than $700 million a year. In its 40 mg form, the PBS paid more than $51 for a box of 30 tablets. New Zealand pays AU $5.80 for a box of 90 tablets. Adopting New Zealand prices for atorvastatin would have saved the PBS more than $1.4 million a day in 2011-12. Patients who paid full copayments would have saved $22 on each box of tablets.

The second and vital change is to pay far less for generic drugs, which can be bought for low prices because they are off-patent. In Australia drug companies must cut prices by 16 per cent when a patent expires. Many countries require much bigger cuts. Canada has mandatory cuts of 82 per cent for some drugs. Australia should require a cut of at least 50 per cent, then benchmark prices against the world’s best. This might seem unrealistic. But Australia’s public hospitals already pay low prices. Like New Zealand, one state’s prices are only a sixth of those on the PBS.

Down the line, a third reform should encourage people to use cheaper but similar pharmaceuticals, which could save at least $550 million a year more.

The pricing agreement between the Government and drug companies expires in the middle of next year. Now is the time to make changes that will end Australia’s bad drug deal.

Medication safety in acute care in Australia: where are we now? (part 1)

Medication use for arthritis and osteoporosis

An evaluation of the compulsory drug treatment program (CDTP) 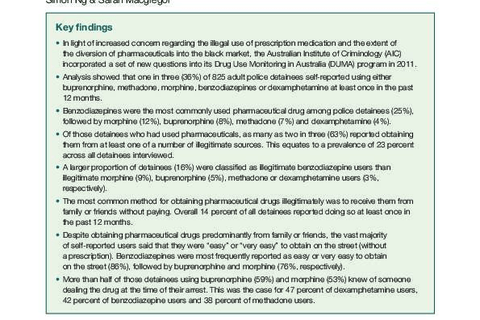