This paper explores the link between tax reform and smaller government.

The TARGET30 campaign by The Centre for Independent Studies advocates reducing the size of general government in Australia (defined as total federal, state and local government expenses) from 35% of GDP to no more than 30% over the next 10 years.

There are two sides to the ‘smaller government’ coin, the other being taxation. TARGET30 provides scope for a substantial reduction in the tax burden.

Tax reform is likely to return to the policy agenda, but there are widely varying expectations of what kind of reform it should be. In the context of stubborn budget deficits and pressures for more spending, some see tax reform as both restructuring and increasing the tax take, or at least leaving total revenue unchanged.

While tax restructuring can be beneficial independently of its implications for overall revenue, the most beneficial kind of reform would encompass restructuring and reduction. Indeed, tax-reducing reform is the key driver of the economic benefits of smaller government.

Taxation was reformed and some taxes were lowered in the decade before the global financial crisis, but there is now a view that the tax cuts were fiscally irresponsible and became a source of today’s deficits. However, the tax cuts of that period were a welcome reform in their own right. The lesson is not that they were wrong but that they should have been accompanied by stronger public expenditure restraint than was applied either before the global crisis or since.

With stronger and sustained expenditure restraint, it is realistic to expect a return to tax-reducing reform in the years ahead. TARGET30 provides a concrete illustration. Reducing the general government expenditure share of GDP gradually to 30% over 10 years would eliminate structural deficits, create a meaningful surplus, and allow room to lower tax revenue by 2.5% of GDP.

While federal taxation accounts for 80% of the national total, reform should also extend to state taxation. Reform options include measures to remove, reduce and restructure taxes.

High priorities for removal include various state stamp duties and the minerals resource rent tax. The options for reduction are led by substantial cuts in company and personal income tax rates. Not all desirable options for removal and reduction would be fiscally sustainable within the headroom created by TARGET30.

Restructuring options could be used to expand the headroom, with increases in some taxes being traded off for the removal of others. The GST is the most obvious of these options. However, in practice, such trade-offs carry the risk that the increases will be implemented while the reductions are deferred or abandoned. Great care will be needed in the design of the reform package to minimise this risk. 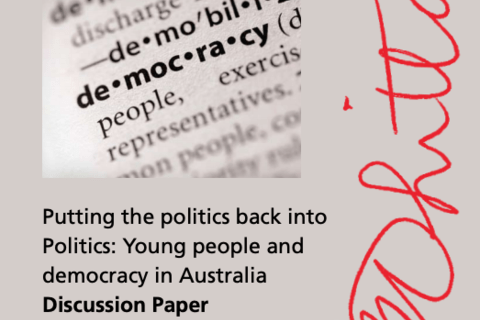 Towards government 2.0: an issues paper

The dilemmas of engagement: the role of consultation in governance

The global economic downturn - some implications for Australian local governments

Children in the parliamentary chambers