This audit assessed the effectiveness of the Department of the Prime Minister and Cabinet’s implementation of food security initiatives for remote Indigenous communities.

Audit objectives and criteria
The objective of the audit is to assess the effectiveness of the Department of the Prime Minister and Cabinet’s implementation of food security initiatives for remote Indigenous communities. To conclude on this objective, the ANAO’s high‑level criteria considered the implementation of the National Strategy for Food Security in Remote Indigenous Communities, the management of the Community Stores Licensing Scheme and the management of funding programs supporting selected food security initiatives in the Northern Territory.

Overall conclusion
Improving the ability of people in remote Indigenous communities to maintain a reasonable and ongoing level of access to a range of food, drink and grocery items that is reasonably priced, safe and of sufficient quantity and quality to meet nutritional and related household needs is recognised as an important contributor to improving Indigenous people’s health status. In line with Australian Government policy, the Department of the Prime Minister and Cabinet (DPMC) (and prior to that, the Department of Families, Housing, Community Services and Indigenous Affairs [FaHCSIA]), has implemented initiatives designed to improve food security for Indigenous Australians living in remote communities, predominantly in the Northern Territory.

Acknowledging the relatively recent transfer of Indigenous Affairs responsibility to DPMC, overall, the administration of the food security initiatives over time has been mixed. Of the five desired actions under the National Strategy for Food Security in Remote Indigenous Communities (the Strategy), only the national healthy eating action plan for remote Indigenous communities has been completed (although this included two actions related to workforce development), despite a timeframe for the completion of all actions other than Corporations (Aboriginal and Torres Strait Islander) Act 2006 registration by mid‑2010. Against expectations, the Strategy did not establish a framework to coordinate food security initiatives, and as a consequence, the Australian Government’s food security initiatives have operated in isolation from each other and are mostly focused in the Northern Territory. As such, the Strategy’s contribution to food security is limited. In view of the expected improvements in general health outcomes that have been linked to improving food security, it would be timely for DPMC to review the current status of the Strategy and provide advice to the Australian Government on options in relation to the actions that are yet to be completed.

In relation to the licensing of community stores, DPMC has adopted the processes developed by the former FaHCSIA to support the administration of the Community Stores Licensing Scheme and licences have now been awarded to 97 out of an expected 110 community stores. As most of the relevant stores have now been licensed, the department’s attention will now be more focused on the ongoing regulation of community stores. The original administrative processes for licensing were developed under the Northern Territory National Emergency Response Act 2007 and reflect the more prescriptive requirements of that Act. However, in adopting the processes developed by FaHCSIA, DPMC has not made adjustments to reflect the risk‑based approach to licensing intended under the Stronger Futures in the Northern Territory Act 2012 (SFNT Act). In practice, this means that DPMC continues to require all stores to comply with a minimum list of stock and operational requirements based on store and community size rather than applying a tailored approach based on the specific risks identified in a community store. A consequence of this approach to requirements is the imposition of potentially unnecessary stock and operational requirements on community stores, representing a cost to those stores, some of which are financially vulnerable and have limited capacity to absorb additional costs. DPMC should review its current approach to licensing requirements to ensure that it aligns with the risk‑based and tailored approach to licensing considerations of the SFNT Act.

The department currently collects information through licence monitoring visits, such as stock levels and pricing, that could be used to measure the availability and accessibility of healthy food in stores. However, the information collected through monitoring visits is stored as individual records in the department’s record management system and there is no consolidation of data. This has constrained the ability of the department to assess the effectiveness of the licensing scheme over time and provided little focus on the measurement of results which makes changes in availability and access to healthy food arising from initiatives difficult to track. Further, there is scope to make greater use of point of sale data to track changes in purchasing patterns and consumption. Building on existing approaches, the department should develop a stronger outcomes focus through the better capture and use of performance information, with consideration of the use of proxy measures to assess the contribution to broader health outcomes arising from food security initiatives.

Administration of the two supporting funding activities could have been improved. DPMC has administered $1.7 million in Strengthening Remote Stores (SRS) grants to support community stores in the Northern Territory. The department’s approach to the allocation of grants in 2013–14 to support community stores did not fully align with publicly released guidelines and resulted in a number of different organisations receiving funding than had the advertised process been followed. Applicants have a right to expect that grants will be awarded on the published criteria and it can be detrimental to the conduct of a transparent and equitable result where this does not occur. As a result of the introduction of the Indigenous Advancement Strategy (IAS), the SRS grants will not be used for future funding rounds with all grant funding to be administered through the IAS. While the arrangements for grant funding have changed, in administering grant processes in the future DPMC should remain mindful of the need to ensure a transparent approach to the selection of grant applications that is consistent with the advertised processes, particularly in view of the general nature of the selection criteria of the IAS.

The second funding initiative, the Aboriginals Benefit Account Stores Infrastructure Program (ABA SIP), involves the upgrade of community store infrastructure in 18 selected communities in the Northern Territory. As at July 2014, the ABA SIP has delivered the refurbishment of two stores, the refurbishment of a manager’s house and the construction of a new manager’s house in two communities. The implementation of the ABA SIP was slow, and was confronted by a number of management and land tenure issues that needed to be resolved before detailed planning and construction work could commence. While these risks were identified in early planning, these matters have had a greater impact on the timeframe than expected. As a consequence, the implementation of the ABA SIP has taken longer than planned but no review has occurred to confirm that the remaining ABA SIP projects in the selected 16 communities are still priorities. Giving greater consideration to the impact of the ABA SIP on the viability of other stores in, or near, a community may reduce the potential for activities that create greater long‑term food security risks to communities.

It is reasonable to expect that the food security initiatives in the Northern Territory—the Community Stores Licensing Scheme, SRS grants and the ABA SIP—have made a contribution to food security outcomes. However, the overall effectiveness of specific food security initiatives, and achieving long‑term food security consistent with the Australian Government’s policy objectives, is often influenced by a range of other factors. The current activities are predominantly focused on the supply of affordable and healthy food to remote communities through community stores. Food security is also related to the purchase and consumption of healthy food and needs to be supported by initiatives focused on education and behavioural change. The Strategy allowed for some focus on these issues, but as noted above, limited progress has been made on the Strategy. With the recent changes to government administrative arrangements, there are opportunities for the department to adopt a more integrated approach to food security, with a greater focus on complementary activities that also encourage changes in consumer purchasing and consumption patterns.

The ANAO has made four recommendations. These relate to DPMC: providing options to the Australian Government in relation to the parts of the Strategy that are yet to be completed; improving the effectiveness of its administration of the Community Stores Licensing Scheme through ensuring the consistency of current store requirements with the SFNT Act and better capturing, consolidating and using performance information to assess regulatory outcomes; and considering the departmental grants assessment processes to ensure consistency with published guidelines.

A tale of three cities

Factors affecting the self-monitoring of blood glucose levels in Aboriginal patients: findings from a remote community 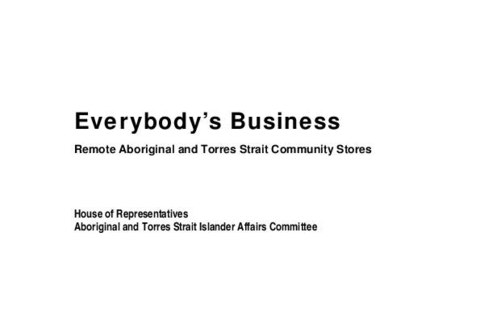