The interest in describing cultural industries and its contribution to growth and development is increasing at both national and regional level. The agency for growth policy evaluations and analyses, Growth Analysis and formerly the Swedish Institute for Growth Policy Studies (ITPS), have on certain occasions studied how these industries and their contribution to the overall economy can be described and understood.

This report is the third part of this work. The report partly discusses how culture can be understood as an ingredient in regional development processes. This section shows both the theoretical starting points and the methods for such work as concrete examples of attempts to capture the economic consequences of regional investments in cultural industries.

In addition, this section reports further discussion of Culture satellite accounts with particular focus on how to try to distinguish cultural industries within national accounts.

Summary
Simply put, culture influences economics in three dimensions. The first dimension
concerns what is often called social capital or factor X and is about the importance of
culture in the relationships, networks and trust that connect the population of a region
together. The second dimension sees culture as something that attracts outside visitors to
the area. In this connection, this is most likely to be historical monuments or scenery.
Recently, the atmosphere and excitement created by those who live in the area have also
come to have growing relevance for describing the value of culture. Berlin's eastern areas
and London's markets are examples of this. When culture attracts visitors in these ways, it
is considered a form of service export. Finally, the third dimension deals with how culture
can influence objects and services that can be transported from the region and thereby raise
export earnings.

This report deals with two aspects of measuring the economic influence of cultural
industries. One describes how to capture direct and indirect effects of a cultural activity or
an investment, and the other how to attempt to see cultural economy as part of national
accounts.

The first section describes two studies that illustrate the information a regional actor should
develop in order to assess the value of a cultural investment's influence on the local
economy. We have focused on the most necessary calculations which need to be made to
have at the least a primary material that can be as supporting documentation at local and
regional level. Calculations of direct and indirect effects are necessary to determine a
culture multiplier, i.e.,a form of return over a certain time. Here it is also important for the
calculation to include the negative effects in terms of leakage. For a small region, the
greatest challenge is perhaps that of mobilizing local resources so that they can be used in
a flexible manner. One of the main conclusions is that input goods and services should, as
far as possible, come from the region.

The second section highlights the problems associated with measuring cultural industries
and culture's share of GDP, or culture satellite accounts. Calculating the proportion of
national accounts (NA) made up of culture, which is the purpose of culture satellite l
accounts, means that one must be able to define both the value added by cultural
production and the definition of cultural activity. Experience from other countries
demonstrates that certain improvements to the statistics will be needed in order to do this,
something which will incur a cost, both in terms of time and resources. It is each country's
economic statistical system that sets limits on how well economic activities that refer to
culture can be identified. One difficulty is that, at present, countries use different
definitions of cultural industries when calculating their culture satellite accounts. As a
result, this decreases the ability to make comparisons between countries.

Independent review of the creative industries

Creative disruption: the impact of emerging technologies on the creative economy 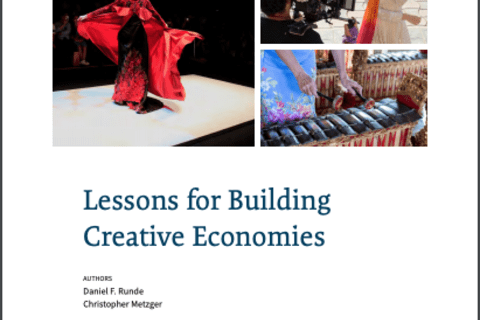 Repayable finance in the arts and cultural sector

Great art and culture for everyone: 10-year strategic framework

What is creative justice?

Co-operatives in the creative industries: think-piece