The Black Economy Taskforce (the Taskforce) was established in December 2016 to develop a forward-looking, multi-pronged policy response to combat the black economy in Australia. The Black Economy Taskforce’s final report (the Taskforce’s report) highlighted the harm that the black economy causes to businesses and the community, penalising honest taxpayers, undermining the integrity of Australia’s tax and welfare systems and creating an uneven playing field for the majority of small businesses doing the right thing. This impact is being felt by many businesses and consumers, including those in the sharing economy.

The ATO has entered into arrangements with some platforms to provide information under its existing information gathering powers. Data collection in the ride sourcing sector has enabled the ATO to undertake preventative activities that help drivers to understand and comply with their obligations. However, a more comprehensive regime is needed to more broadly improve compliance in this area.

To combat this issue, the Taskforce’s report recommended that a compulsory reporting regime be established:

‘Operators of designated sharing (‘gig’) economy websites should be required to report payments made to their users to the Australian Taxation Office (ATO), Department of Social Services (DSS) and other government agencies as appropriate. The Government should also continue to raise users’ awareness about the potential tax obligations from participation in sharing economy activities.’

As part of the 2018-19 Federal Budget the Government responded to the Taskforce’s report, agreeing that there should be greater transparency of payments made through sharing economy websites and announcing that it would consult on how this recommendation could be implemented. In agreeing with this recommendation, the Government noted that innovation in business models should be supported by Government and the community, and regulatory changes should aim to minimise the regulatory burden, and support a level playing field with existing, compliant businesses.

This consultation paper is seeking input on the design of a new reporting regime for sharing economy activities.

Effective tax systems are generally underpinned by a reporting regime which captures, efficiently and seamlessly, all taxable economic activities. Reporting should not stifle economic activity and entrepreneurship. Rather, it has the potential to make it easier for those receiving income from third parties to meet their tax obligations.

The ATO has already begun to improve reporting in the sharing economy, working with ride sharing and accommodation platforms and developing education and awareness campaigns. To date in the ride sourcing sector, this has improved GST registration rates from 54 per cent to 77 per cent. However as this reporting is not in a standardised format, and does not capture all online platforms in the sharing economy, a universal regime for reporting transactions is still necessary. Unlike many black economy activities which rely on mechanisms to avoid being traceable, sharing economy platforms are based on electronic systems, hence many businesses in this industry could benefit from improved reporting processes, with a minimal regulatory impact.

Options for taxing the digital economy: a government discussion document

The impact of Airbnb on WA’s tourism industry 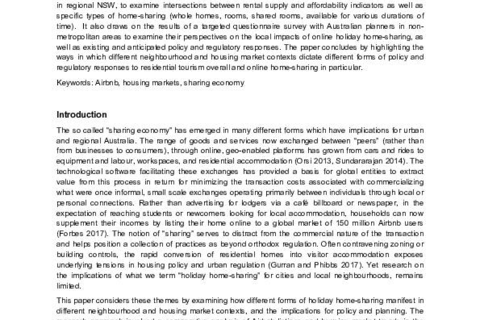 Airbnb in Melbourne: how does the existing urban spatial structure shape the location of short-term accommodation sharing economy activity?