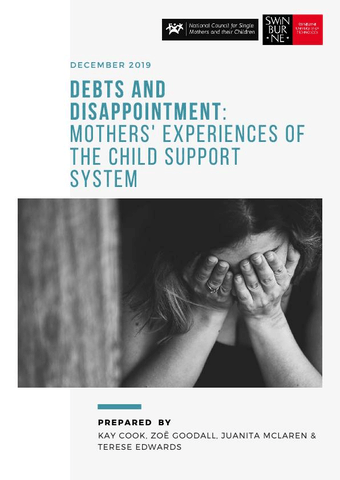 Debts and disappointment: mothers’ experiences of the child support system

Child support typically refers to a regular cash transfer paid by a non- resident parent, exclusive of other forms of “spouse” or “matrimonial” support (International Network of Child Support Scholars 2019). In the Australian system, the calculated payment amount, known as the child support liability, is a product regulated through a legislative formula.

Initially, the Australian Taxation Office (ATO) was responsible for collecting and enforcing child support payments and, from 1989, assessing the amount of child support to be paid. This task has since been undertaken by the agency now known as the Department of Human Services-Child Support (DHS-CS).

However, most customers and commentators still colloquially refer to this as the Child Support Agency (CSA), which was the longest-standing agency associated with the child support system in Australia.

The body of the report speaks in detail to many facets of the child support system and the operation of the policy, as experienced by survey respondents.

"Outside systems control my life"

Fact Check: Did the budget take from working mums and give tax cuts to millionaires?

Does raising the minimum wage help the poor?

Child poverty and family structure: what is the evidence telling us?

A snapshot of contemporary attitudes to child support