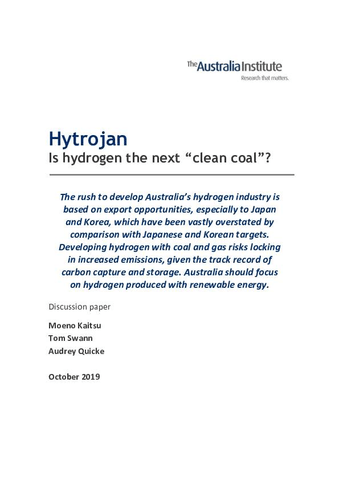 Hytrojan - is hydrogen the next “clean coal”?

The introduction of hydrogen to the energy and transportation sectors, as both an energy carrier and an energy source, could play a major role in reducing emissions and slowing the increase of global temperatures. Hydrogen fuel emits no carbon dioxide at time of use and can be produced using renewable energy sources.

Many hydrogen development projects are already underway across the world.

The hydrogen debate in Australia is fuelled mainly by the export opportunities to Japan, and to a lesser extent, South Korea.

In 2017 Japan announced their intention to shift towards a “hydrogen economy” and import hydrogen on a large scale to meet their domestic needs.

Australia is well positioned to become a major supplier of Japan’s hydrogen due to its strong bilateral trading relationship, geographic proximity, and abundance of natural resources.

The Australian government is currently supporting the development of fossil fuel hydrogen projects. These projects are highly polluting unless combined with carbon capture and storage (CCS). Yet promises and predictions about CCS have a long history of being proven false.

The push into fossil hydrogen is based on the urgency of establishing a hydrogen supply chain to Japan to capture market share. However the basis for this claim is not supported by official Japanese targets.

Opportunities for Australia from hydrogen exports

A vision for hydrogen in New Zealand: green paper

Mainly Coal Advocacy - What does the MCA stand for?

Renewable energy investments in the Pacific: a process evaluation