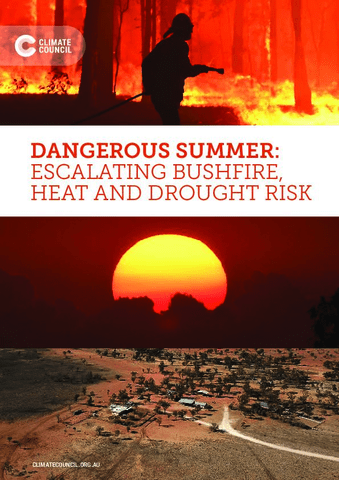 Against a long-term heating trend from the burning of coal, oil and gas and rising greenhouse gas emissions, many extreme weather events are worsening, putting Australian lives at risk and threatening livelihoods and well-being. The latest Bureau of Meteorology Outlook for Summer 2019/20 forecasts hot conditions for most of Australia and a dry eastern Australia. We could experience a crisis summer marked by a terrible trifecta of heatwaves, drought and bushfires.

As the climate crisis intensifies, there is no federal leadership, no vision and no effective policy.

Australia is being battered by extreme weather events, made worse by climate change. The summer of 2019/20 is shaping up as another terrible trifecta of heatwaves, droughts and bushfires.

Climate assessment for the electorate of Capricornia