Eliminating the undue influence of money in politics

Public trust in our democracy is low. A perceived lack of integrity in Australia’s political and bureaucratic processes, weak laws regulating the flow of money and undue influence in government, and gaps in the jurisdiction of accountability institutions have led to public concern that government, politicians and public servants do not always act in the public interest. Reform is needed to help strengthen confidence and trust in liberal democracy and the rule of law.

The High Court’s decision in McCloy v New South Wales stated that ‘ [e]quality of opportunity to participate in the exercise of political sovereignty is an aspect of the representative democracy guaranteed by our Constitution’.  This equality of opportunity is hindered by the current state of our national integrity system.

The Commonwealth has the weakest integrity laws in the country. There is no independent oversight of Commonwealth parliamentarians, ministers, political staff and public servants. Moreover, political influence can effectively be bought as a result of inadequate regulation of political donations and lobbying. Political donations under the threshold of $14,000 need not be disclosed, donations are only disclosed annually, and there is no limit to how much parties can spend on campaigns. Lobbyists working in house directly for a company or association need not adhere to the Lobbyist Register or Lobbying Code of Conduct. A Commonwealth Parliamentary Code of Conduct does not exist, nor does a National Integrity Commission. The Australian Electoral Commission lacks the investigative powers and resource to enforce compliance with disclosure requirements and breaches of the Ministerial and Lobbying Codes of Conduct have no real consequence.

This platform set outs 15 reforms needed to eliminate the undue influence of money in politics: 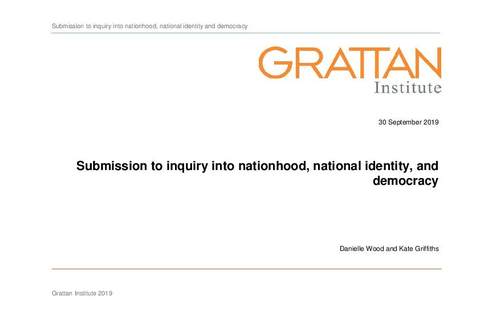 The ways of the world: implications of political donations for the integrity of planning systems