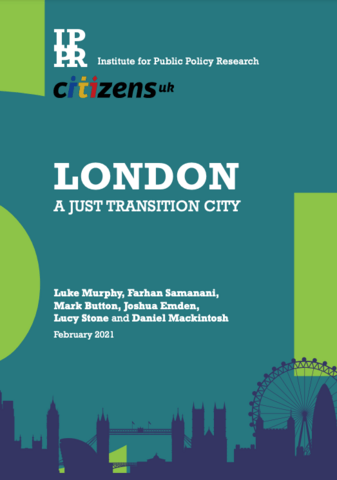 The COVID-19 crisis has had wide reaching implications for Londoners. The crisis has amplified and exposed structural inequalities, exposing vulnerabilities and highlighted the need to ‘build back better’. The pandemic has also shown that our society and economy have to be more than efficient: they must be resilient.

The crisis has also shown what a future London could look like: a city that prioritises public and active transport, with more room for people and less for cars, with cleaner air, with time and space for people to enjoy nature. The crisis has shown us that rapid change is possible, and that the government is able to act in ways many thought impossible.

This report, the result of a unique project between IPPR and London Citizens, sets out the results of an extensive listening campaign, run by London Citizens, on the priorities for the next mayor of London. It charts how action on the climate crisis could help the capital to ‘build back better’ but only if economic and social justice are allied to climate action. COVID-19 has highlighted and exacerbated existing injustices in our capital city. As we recover from the pandemic and seek to tackle a different crisis – the climate emergency – this report shows how climate policies must reduce emissions and address wider issues including poverty, inequality and ill-health. It also shows that the public, and poorer communities in particular, must have a stake-in and help lead the transition to a greener and fairer economy.

The report sets out the learnings and asks of the listening campaign, which connected with 706 Londoners from across a range of school, non-profits and faith institutions. Each were invited to discuss which issues mattered most to them and, crucially, where they wanted to see action by the next Mayor of London.