Some industries have far more political influence than others, and some political systems are more susceptible to the influence of industries than others. The relationship between the defence industry and the US federal government has been so strong for so long that the notion of 'Military-Industrial Complex' is widely used to analyse politics and economics in the US by analysts from across the political spectrum. In Australia, the Independent Commission Against Corruption (ICAC) is currently investigating evidence of the links between the previous NSW Labor Government and the mining industry. In the words of Geoffrey Watson, QC, the counsel assisting the commission:

But while extreme cases such as the US government's relationship with the defence industry and cases of overt corruption attract substantial attention the systematic contortion of government policy to deliver benefits to particular industries is less widely discussed. Such indifference to this process, a process that can shift billions of dollars from one group in society to another can be explained in a number of ways including:

Economists typically assume that there are no externalities when they analyse economic behaviour . When 'small' externalities (such as noise from leaf blowers) exist they are typically ignored by policy makers but when 'larger' externalities such as radioactive waste are identified they are described as a form of 'market failure' that warrants government regulation. Whether or not the 'distinctive sound' of a Harley Davidson is a small externality that should be ignored or a larger externality that should be prevented through regulation is, of course, a matter of judgement.

Economists typically suggest that if the benefits of an activity to those who enjoy it exceed the costs of that activity to people who don't enjoy it then society is better off with the activity.

While it is hard to value the external costs and the benefits of activities such as leaf blowers and nuclear reactors, it is the job of politicians to value the political pain associated with supporting or opposing a particular policy. Politicians who are poor at making such choices are often replaced by those who are better at it.

Externalities help explain why governments are susceptible to lobbying and the influence of large corporations. Small changes in policy can deliver huge windfalls to a small group while imposing small costs on a large group. A policy change that costs each of Australia's 22.9 million residents a dollar per week would collectively cost us around $1.2 billion per year. A private company that thought it might gain 10 per cent of that cost ($120 million per year) would be highly motivated to engage lawyers, economists and lobbyists to help ensure the policy went ahead while few if any 'rational' individuals would spend much time or money to protect their $1 per week.

A successful politician likely possesses the ability to predict that a low profile policy change that would cost people $1 per week will deliver them little if any political pain from the citizenry. Furthermore, the successful politician will likely anticipate that political benefit will flow from a business community who, while relatively silent on the specifics of policy change, are more vocal in providing general support for a government that 'listens' and 'understands what business needs if it is to create jobs and opportunities for workers'. While the tendency amongst successful politicians to grant policy changes that harm a diffuse majority and help a concentrated minority is consistent with the economic analysis of externalities, it is likely enhanced even further by the willingness of such concentrated minorities to donate substantial amounts of money to politicians who are willing to 'listen'.

Of course not all industries benefit from the same policy changes and, in turn, not all businesses can be heard. For example:

Given that not all firms can get what they want from governments it follows that some firms must be more successful in encouraging governments to 'listen' to them than are others. Of course, if governments made decisions solely on the basis of the costs and benefits of their decisions to their constituents then policy choices would be made with reference to the broad interests of the community rather than the narrow interests of the industry lobbyists. However, as discussed above, when the costs of the policy change are diffused across the community and the benefits concentrated in the hands of a few there is likely to be a 'market failure' when it comes to the ear of government. 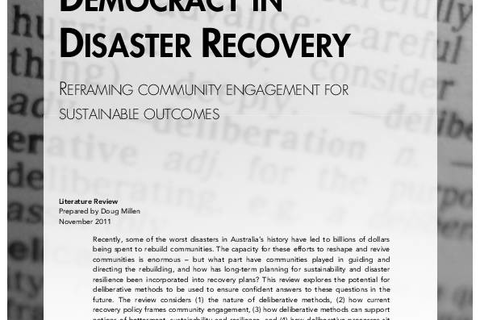 Behind the moral curtain: the politics of a charter of rights