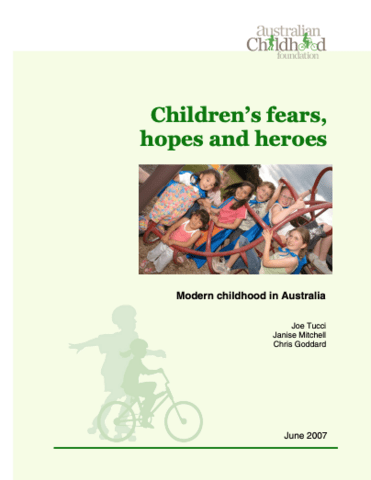 This report examines the experiences of modern childhood through the results of an online survey undertaken by a national sample of 600 children and young people aged between 10 - 14 years.

The following key themes emerged from the study’s findings. Children’s sense of their place in the world is under threat. Children are particularly concerned about the environment. Over a half of the children surveyed are worried about not having enough water. Just over four in ten (44%) are nervous about the future impact of climate change and 43% of children are worried about air and water pollution. A substantial proportion are also concerned about the escalating tension in world affairs. Almost a third of children (31%) are worried that they will have to fight in a war when they get much older. More than a third (36%) are apprehensive about terrorism. A quarter of children are so troubled about the state of the world that they honestly believe it will come to an end before they get older.

Children’s sense of their community is under threat. Half of the children (51%) did not feel welcome in shops and cafes. Over a third (36%) believed that adults do not care about what children think. A substantial proportion of them were really worried about being teased (57%), not fitting in with friends (54%) and being bullied (52%). 1 in 10 of the children surveyed were particularly anxious about being called names because of their culture or nationality. 1 in 13 were worried about being called names because of their religion. More than a quarter (27%) of children feared being a victim of crime. Increasingly, children are disturbed by the relentless pressure of marketing aimed at them. A large majority (88%) believed that companies tried to sell them things that they do not really need.

Children’s sense of themselves is under threat. Overwhelmingly, a substantial proportion of children feel insecure. Nearly half (46%) of the children surveyed do not feel confident about themselves. More than a half (57%) worried about what others thought about them. 4 in 10 stated that they do not ever feel like they are doing well enough. Almost 1 in 5 (19%) believe they are growing up too fast. A large number (41%) of children are specifically worried about the way they look with 35% concerned about being overweight and 16% being too skinny. By using a cluster analysis, these overall findings suggested that the population of children who completed the survey could be categorised into children who felt well connected and supported (52%), the "worried" group (42%) or the "disconnected and insular" (8%) group. This last group, in particular, show signs of enormous vulnerability and are most likely to be set on an early trajectory of hopelessness and despair.

The authors conclude that children themselves believe that adults show little concern or respect for their views and opinions. This study is unequivocal in the strength of its conclusion. Children should be consulted about what the world should be like. And adults should listen.

The report finally notes that all children, and in particular those who are disconnected and insular, would be better supported if the Australian Government re-established the role of Minister for Children and created a National Children’s Commissioner. Together, these national structures should carry responsibility for developing nationally co-ordinated and properly resourced responses to vulnerable children and young people.