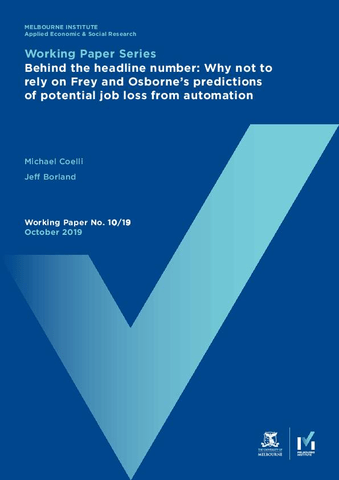 Behind the headline number: why not to rely on Frey and Osborne’s predictions of potential job loss from automation

This article reviews a highly influential study that estimated potential job loss from advances in Artificial Intelligence and robotics: Frey and Osborne (FO) (2013, 2017) concluded that 47 per cent of jobs in the United States were at ‘high risk’ of automation in the next 10 to 20 years. First, we investigate FO’s methodology for estimating job loss. Several major problems and limitations are revealed; especially associated with the subjective designation of occupations as fully automatable. Second, we examine whether FO’s predictions can explain occupationlevel changes in employment in the United States from 2013 to 2018. Compared to standard approaches which classify jobs based on their intensity in routine tasks, FO’s predictions do not ‘add value’ for forecasting the impact of technology on employment.

Machines that learn in the wild: machine learning capabilities, limitations and implications

The creative economy and the future of employment

Reskilling for the fourth industrial revolution: formulating a European strategy

Skills forecast: trends and challenges to 2030

Where machines could replace humans - and where they can't (yet)