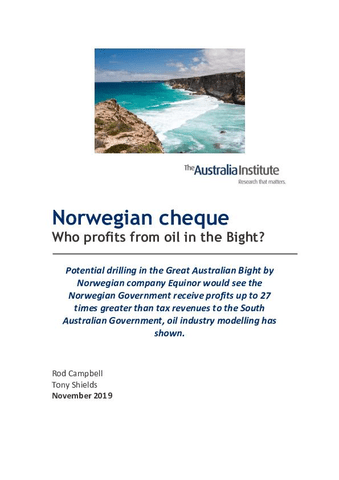 Norwegian oil company, Equinor, is planning exploratory drilling for oil and gas in the Great Australian Bight beginning in late 2020. Equinor is 67% owned by the Norwegian Government via its sovereign wealth fund.

We have used modelling commissioned by the oil and gas lobby to estimate the payments the Norwegian Government would receive if this oil source was developed. We then compare that to the tax payments that would be received by the South Australian and Australian Governments.

The forecast tax revenues take decades to materialise. Oil development in the Bight may also be found to be economically unviable and not proceed. The project could also become unviable after it starts producing oil. Events that would render the project uneconomic include competition from lower cost oil produced elsewhere and reduced oil demand (eg because of the development of electric cars).

The development of the Gippsland economic modelling tool

Why do royalties reign in the market for technology?