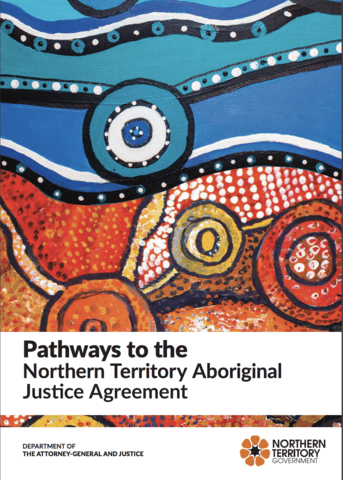 This document – Pathways to the Northern Territory Aboriginal Justice Agreement (AJA) – is a companion document to the draft Agreement. It brings together the background information, consultation findings and evidence that informed the development of the Agreement. It provides the rationale for the initiatives and strategies contained in the Agreement.

Aboriginal Justice Agreements (AJAs) first emerged as a result of the Royal Commission into Aboriginal Deaths in Custody (RCIADIC) which handed down its final report in 1991. Six years later, continued high incarceration rates and deaths in custody of Aboriginal people prompted a high-level meeting of Aboriginal and Torres Strait Islander (ATSI) leaders. As an outcome of this meeting, it was recommended that each state and territory, in coordination with respective Aboriginal Justice Advisory Councils4 and relevant Aboriginal bodies, develop AJAs to improve the delivery of justice programs and outcomes for Aboriginal people.5 However, it was not until later that year, at the National Ministerial Summit on Aboriginal Deaths in Custody in Canberra, that all state and territory governments, except the Northern Territory, agreed and adopted the recommendation to implement strategic agreements in partnership with Aboriginal people.

The indefinite detention without trial of Aboriginal people