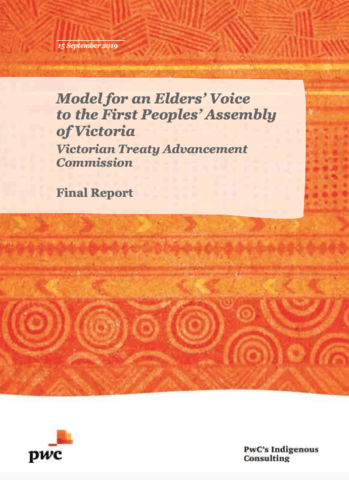 This report provides the views and preferences of over 201 Aboriginal and Torres Strait Islander Elders, gathered through a series of 19 workshops held across Victoria between May and August 2019.

The importance of Elders in Aboriginal society cannot be over-stated. Our Elders are the guardians of our culture and leaders of our kinship systems. They proivde strength, wisdom and cultural authority. We must hear the voices of our Elders if we are to be successful in our historic journey towards Australia’s first treaty.

Aboriginal and Torres Strait Islander people across Australia have demanded treaty/treaties for decades. Despite this, Australia is one of the only Commonwealth countries that does not have a treaty with Indigenous peoples. Therefore, it is important to acknowledge that this project builds on years of work led by VTAC, the Aboriginal Treaty Working Group and others. It is particularly informed by findings from the extensive consultative processes previously undertaken, including for the Final Report on the Design of the Victorian Aboriginal Representative Body (now known as the First Peoples’ Assembly); the Community Assembly and the State-wide Elders Forum reports. Throughout all processes, the Aboriginal community have consistently acknowledged the need for an Elders’ Voice to the Assembly. The Elders’ Voice will have an important role to play in Victoria’s treaty process. See Figure 5 below for a timeline snapshot of the Victorian treaty process to date.