The capacities of private developers in urban climate change adaptation

The urban environment is particularly exposed to climate impacts, due to a range of factors, such as its geographical location, spatial immobility, and high population. The urban development industry relates to climate change because the built environment itself has climate impacts; the location and scale of development products influence the degree to which users are exposed to climate hazards; and climate change presents multiple challenges to which developers will likely need to adapt. However, a major policy and knowledge gap exists in the social scientific understanding of the private sector developers’ capability to respond in an effective and timely way to the climate adaptation challenge. Using South East Queensland (SEQ) as a case study, this research investigated the institutional capacity of the private urban development sector to respond to climate change. This report explores findings from an online questionnaire survey, and a series of interviews and focus groups.

Development firms with a greater adaptive capacity were generally larger, with greater economic resources, and were less reliant on bank funding. They also had a diverse range of development products, and could afford to hire or contract specialist consultants. Commercial developers were also more likely to incorporate adaptive measures into developments than were residential developers. This was driven by tenant demand, government rebates, and reduced operating and maintenance costs. Commercial developers also subscribed to industry certification and rating schemes such as Green Star and EnviroDevelopment. On the other hand, residential developers sold rather than leased development products; and reported little, if any demand for sustainable features from the market, which was primarily price driven.

The major barriers to adaptive capacity were economic, marketing and regulatory issues. The development economy had not fully recovered from the Global Financial Crisis (GFC). The GFC had also severely curtailed bank lending for property development; financiers required a higher percentage of equity and presales, and required loans to be repaid in less than two years. State and Local Government regulation and processes were also seen as barriers to adaptation; regulation was viewed as reactive, complex, inconsistent and inflexible. The perceived slowness of local government was a particular problem.

Generally speaking, the SEQ development industry had low adaptive capacity, but this also depended on the financial, insurance and government players. The insurance and financial sectors had the potential to drive adaptation, but current practices resulted more often in maladaptation. Further research into the role of allied professionals, such as consultants and contractors, would be valuable; as would research into the potential for the insurance industry to drive climate change adaptation.

Too hot in the city

Financing Indian urban rail through land development: Case studies and implications for the accelerated reduction in oil associated with 1.5 °C

Urban climates in the transformation of Australian cities

Our future world: global megatrends that will change the way we live

Beyond denial managing the uncertainties of global change 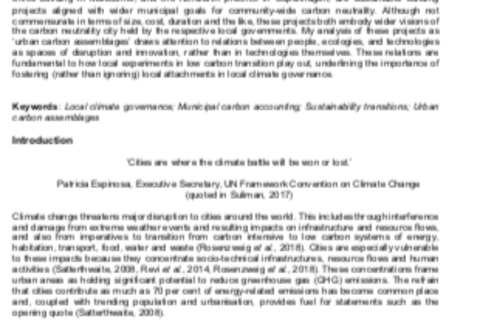