Bringing Them Home 20 years on: an action plan for healing

On 26 May 1997 the landmark Bringing Them Home report was tabled in Federal Parliament. The report was the result of a national inquiry that investigated the forced removal of Indigenous children from their families. This marked a pivotal moment in the healing journey of many Stolen Generations members. It was the first time their stories—stories of being taken from their families—were acknowledged in such a way.

It was also the first time it was formally reported that what governments did to these children was inhumane and the impact has been lifelong.

Most Aboriginal and Torres Strait Islander people have been affected by the Stolen Generations. The resulting trauma has been passed down to children and grandchildren, contributing to many of the issues faced in Indigenous communities, including family violence, substance abuse and self harm.

Two decades on and the majority of the Bringing Them Home recommendations have not yet been implemented. For many Stolen Generations members, this has created additional trauma and distress.

Failure to act has caused a ripple effect to current generations. We are now seeing an increase in Aboriginal people in jails, suicide is on the rise and more children are being removed.

Addressing the underlying trauma of these issues through healing is the only way to create meaningful and lasting change.

Commemorative events, like the 20th anniversary of the Bringing Them Home report, are an important part of the healing process, for Stolen Generations members, their families and the broader community. In order to change, you have to remember.

The anniversary presents an opportunity to reset—to secure sustainable support to help reduce the impact of trauma. This report makes three key recommendations:

While this report might primarily detail the response from government to the Bringing Them Home report, it is not a report to government about government. This is a report for everyone, and outlines as a whole how we can actively support healing for Stolen Generations and their descendants. There needs to be commitment to making change. We all have a responsibility to do this together.

The price of not acting on the recommendations means an increased burden for Australia as a whole. It’s time for action. We need to address the unfinished business—for the sake of our Elders, our young ones, for our entire communities and all Australians.

Healing for Our Stolen Generations: sharing our stories

Children living in households with members of the Stolen Generations 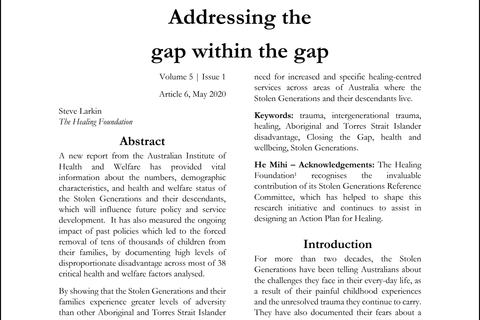 Addressing the gap within the gap

"Sorry": the unfinished business of the Bringing Them Home report