From the AHA survey the majority of emerging adults identify owner-occupation (60%) as their ideal. Fifty-four per cent aspire to live in a house and 34 per cent in an apartment. Around 32 per cent want four or more bedrooms compared to 30 per cent wanting one or two.

Few emerging adults are actively planning for their housing futures with housing aspirations, for most, remaining secondary to pursuing education and employment goals (AHA).

For early adults, the aspiration for owner-occupation increases to 70 per cent, but by this stage the income and education divide in being able to meet such aspirations becomes starker, with far greater proportions of degree-educated households being confident they can obtain ownership within five years compared to those educated to year 12 and below (AHA).

The housing aspirations gap in early adulthood is greatest for those in the private rental sector, particularly those on higher incomes, and narrowest for those in home ownership, regardless of income (AHA).

Across both age groups, having somewhere safe and secure to call home was the top priority (AHA).

The goal of policy makers should be to enable young people to move towards secure independence through a tenure neutral mix of housing assistance. This includes the key policy platforms of pursuing, and living near, opportunities for study and work; balancing flexibility with security within the dwelling and community; providing diversity and real choice in dwelling type, size and location; and helping households move towards independence and longer term financial freedom and security in owning or renting.

The cost of living: an explainer

Conflict economies in the Middle East and North Africa

COVID-19 and the demographic distribution of health and economic risks

Housing affordability, tenure and mental health in Australia and the United Kingdom: a comparative panel analysis 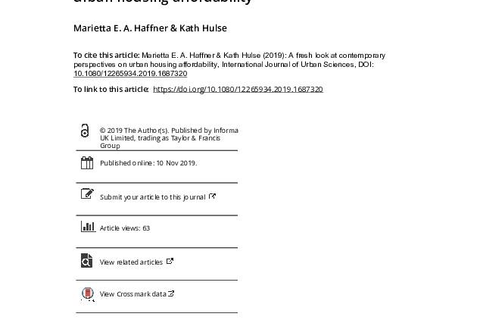 A fresh look at contemporary perspectives on urban housing affordability

Affordable rental housing: the problem and its causes