The cost of living: an explainer

The cost of living in Victoria has increased in proportion to wages, which have tended to stagnate since the beginning of the decade. The primary driver for a rise in living costs appears to be housing, which has decoupled from the majority of indicators and left few options for affordable housing— particularly in Melbourne.

The biggest expenditure increases for metropolitan Melbourne households have been recorded in education, and insurance and financial services. The inflation rate in Melbourne has generally kept pace with the national rate set by the Reserve Bank of approximately two to three per cent over the past two decades. Data from the 2017 December quarter shows that Melbourne and Brisbane had the second-highest consumer price index at 112.3, while Sydney had the highest at 113.3.

Low-income households and those on government pensions or Centrelink allowances have faced the largest increases in the cost of living. On the other hand, employee households have experienced the slowest increase in the cost of living. Increases in housing costs, for example, have a substantially higher impact on those with low incomes who have little financial room to manoeuvre.

The weak increase in wages has meant that Australian households have faced lower purchasing power since early 2012. Wage growth fell continually from March 2012 to June 2017, while inflation remained steady. An increase in inflation and prices overall, coupled with wage stagnation, means that consumers must spend more of their wages to acquire the same standard of living that was possible in the past. Real wages have in fact failed to keep up with inflation for a number of quarters over the past three years which essentially means that workers’ earnings are declining.

Melbourne has seen a dramatic increase in property prices in the past decade and is ranked the fifth most unaffordable major housing market in the world, which places it in the ‘severely unaffordable’ category. Housing in Melbourne has an average price-to-income ratio of 9.9, a figure that is considered very high. While the impact has been greatest for low-income earners, mortgage and rental stress is also on the increase across all household types.

Stalling wages, falling growth: getting Australia out of the wage suppression trap

Can information about inequality and social mobility change preferences for redistribution? Evidence from randomized controlled trials in 11 high and middle-income countries 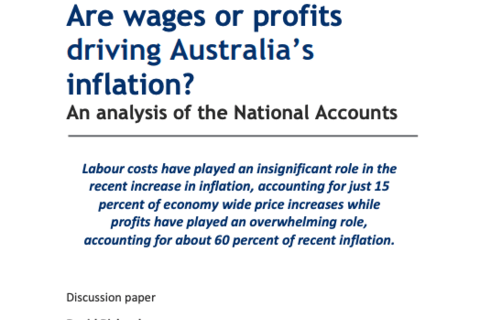 Are wages or profits driving Australia’s inflation? An analysis of the National Accounts

Power to the people: how stronger unions can deliver economic justice

Profits and the pandemic: as shareholder wealth soared, workers were left behind

The 'five economists' plan: the original idea and further developments