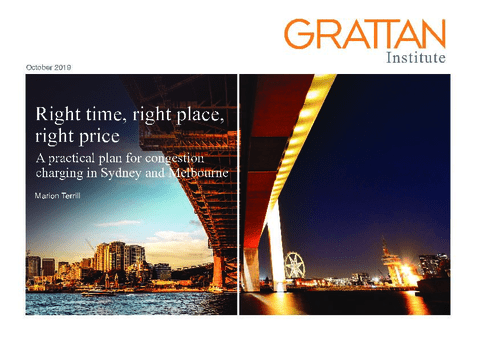 Within the next five years, the NSW and Victorian governments should introduce a cordon charge around the CBDs of Sydney and Melbourne. Drivers should be charged $5 to enter the CBD during the weekday morning peak and another $5 to exit in the afternoon peak.

The money raised should be spent on upgrading CBD streets to make them safer and less congested for pedestrians.

The ‘cordon’ for the Sydney CBD should cover the area west of and including the Domain, north of Central Station, and east of Pyrmont.

The cordon for the Melbourne CBD should include the Hoddle Grid, the high-rise areas of Docklands and Southbank, and the wedge to the north of the city formed by Victoria, La Trobe, William, and Peel streets (encompassing the Queen Victoria Market).

Eventually, drivers should be charged on a per-kilometre basis for driving across each city’s entire road network at the busiest times – but only as part of a package of measures including abolishing fuel excise and creating a safety net to ensure people on low incomes and with impaired mobility are not disadvantaged.

Ambitious reforms are always challenging for governments. But Australian governments have the advantage that they can learn from cities around the world that have already successfully implemented congestion charging. It’s time for Sydney and Melbourne to join these cities in the fast lane.

Pricing out congestion: experiences from abroad

The price is right: the road to a better transport system