Is New York crazy? It’s the latest global city to embrace congestion charging. Vancouver, Beijing, and Jakarta are not far behind. London, Singapore, Stockholm, and Milan have been doing it for years. But in Australian cities, when governments see congestion, the solution they reach for is more roads and more public transport. Decades of more roads and more public transport have given us the levels of congestion we see today. It’s time for a new approach. It’s time for Australian cities to embrace congestion charging.

Excessive congestion is costly and wasteful. While no one wants to pay more to drive, neither do they want the ordeal of delays and unpredictability when they do travel. Fast and reliable transport of people and goods is essential if we are to reap the economic and social benefits of big vibrant cities.

There’s no doubt that congestion is a concern for many motorists in Australia’s big cities. Each of us is concerned about all the traffic slowing us down, but there is no trigger for us to be concerned about our contribution to slowing everybody else down.

A cordon charge for people entering the CBDs of Australia’s largest cities in the morning peak, and leaving in the afternoon peak, would have a substantial impact. Even a modest charge would mean about 40 per cent fewer cars entering the central area in the morning peak, and speed increases of about 1 per cent across the network. These speed increases are similar to those from building new freeways that cost billions of dollars – whereas congestion charging has no net financial cost to the taxpayer.

And if getting public transport right is a pre-condition, there has never been a better time. Investment in public transport and roads is running at more than $30 billion in 2018-19 – an all-time high. Significant new public transport is due to come into operation in coming years: the Sydney Metro City and Southwest in 2024, Melbourne Metro in 2025, and Western Sydney Airport rail in 2026. The technology has improved too, with Automatic Number Plate Recognition now accurate enough to use as the primary detection technology. And one of the many lessons from global cities with congestion charging is that initial public scepticism soon turns to support when people see how effective congestion charging can be.

Critics may argue that congestion charging seems unfair: that it could hurt those who can least afford it, or that they’d feel as though they were being punished for driving when they had no choice, or that they’re already paying too much to the government. But these fears are overblown.

People who drive to the city each day for work are more than twice as likely to earn a six-figure salary as other workers; the median income for a Sydney driver to the CBD is nearly $2,500 a week – about $1,000 a week more than the median income of a full-time worker across all of Sydney. Nor is it true that people have no choices; the CBD is well-serviced by public transport, which is how most people get there. The charges would only apply during peak-periods. And commercial traffic can expect to pass the costs through to their customers, because their competitors would be paying the charge too. In the end, if particular roads are in high demand, it’s fairer that heavy users pay more than those who rarely or never use them.

This report recommends that Australian state governments introduce congestion charging in the larger capital cities. First, they should introduce a cordon around the CBD. Then, charges should be used to get our most clogged arterial roads and freeways flowing better. Our next report, to be published next week, will explain in detail how it could be done in Sydney and Melbourne. 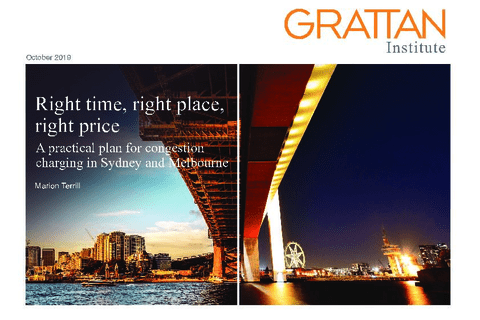 Pricing out congestion: experiences from abroad

The price is right: the road to a better transport system