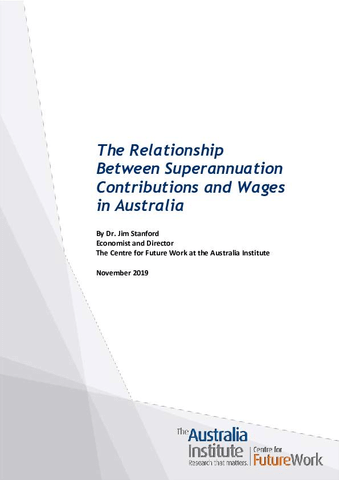 The relationship between superannuation contributions and wages in Australia

This research refutes claims made by some commentators and lobbyists that higher superannuation contributions would automatically lead to lower wages, and hence would be self-defeating. The research finds no statistical evidence for that claim in Australian empirical data.

The paper reviews economic statistics from the introduction of superannuation to the present. On average, wages were more likely to accelerate and grow at a faster rate when the superannuation guarantee (SG) rate was increased, than to decelerate or grow more slowly. This indicates a slight positive correlation between wages growth and changes in employers’ minimum SG rate.

The paper also reviews theoretical predictions and empirical findings from previously published economic research. Even under very restrictive and unrealistic assumptions about competitive market-clearing behaviour in labour markets, the expectation of a fully offsetting one-for-one trade off between wages and SG contributions only occurs in the special cases of perfectly inelastic labour supply, or perfect substitutability between voluntary and policy-induced personal savings. Neither of those conditions prevail in practice. More realistic economic models (that allow for responsiveness in labour supply, minimum wages, and other real-world features) do not anticipate a full trade-off – and many expect no trade-off at all.

The paper concludes that current record-low wage growth in Australia cannot be "fixed" by abandoning scheduled increases in the SG rate (which is currently legislated to grow from 9.5% of wages to 12% over a five-year period, beginning 1 July 2021). Abandoning those increases would only further suppress the total compensation received by workers, which has been falling steadily as a share of GDP for decades. Instead, weak wage growth should be tackled with direct wage-boosting policies; the determination of wages and superannuation contributions are largely independent policy decisions.

Money in retirement: more than enough